We talk about the new album, audience reaction to it, and her songwriting process.

Rachael Yamagata emerged as a solo artist in 2003 with her eponymous EP featuring piano-driven pop-rock and an emphasis on lyrics that touched a core in many of her fans. Her music has been featured in a variety of television programs and movies, including The O.C. and Definitely, Maybe. After a long break between her first full-length album(Happenstance, 2004), she released a double album last fall entitled Elephants…Teeth Sinking Into Heart. This month, she is on tour to support the album release, and I had the opportunity to speak with her on the phone recently about the new album, audience reaction to it, and her songwriting process.

What inspires you to create music?

I happened upon it because I was always into piano as a safety zone hobby that would make me feel better. I'd go off somewhere, find an empty room, and play piano for hours. I've done it all my life — when I was at home and through college, even. I just loved to play.

Songwriting came about by chance. I'd always written songs on the fly and improv things, but never wrote them down or kept track of them. I thought I was going to pursue theater and be an actress, but when I wrote my first song and really paid attention, I became completely intoxicated by the process. More so than I ever felt with somebody else's character.

There is drive to express and process what I go through. [Songwriting] became the best form for me — more than speaking with a friend or writing in a journal. Something about being able to put a melody, instrument, and lyrics together made me feel better. It's an internal angst of sorts that made me become a songwriter. I needed a way to express myself in a way that said what I needed to say, and that's what it became. 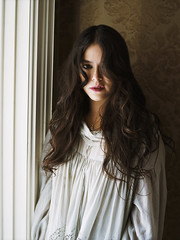 Have you noticed any shift in your writing process over the years?

Yes and no. I think that I wrote two very different records between this one (Elephants…Teeth Sinking Into Heart) and the last one (Happenstance). I think this one was somewhat influenced by the environment I was in when I wrote it. With the first record, I spent several months in Chicago, and with this past record I was secluded up in the woods near Woodstock, New York. I would stay up late writing, and I think somehow the nature elements, the seclusion, and the romantic experience of being so isolated seeped into the music. The writing environment definitely helped to color this record.

In terms of the process — it's always been lyrics, melody, and music at the same time for me. That's still similar. I think maybe I've grown as a lyricist in terms of becoming a bit more poetic, using some imagery that I haven't used before.

Was it just for this album or do you normally set aside time and say, "I'm going to write now," as opposed to it being a part of everything else that you are doing?

No, I can't ever just sit down and say, "Now I'm going to write." It's very hard for me to write on tour, so the most I can hope for when I'm on the road is a phrase here or there that I'll revisit later. For this one, it was nine months of experimenting. It wasn't exactly like saying, "Now I'm going to write," because I had nine months. It was more that I gave myself space to write if I want to, and it came pouring out of me. I think it was the result of two years on the road and a crazy amount of stuff that I hadn't had a chance to process. I wrote around 160 songs at that time and fully demoed them. That was really great for me.

Since that record, I haven't written a song. I wrote a Christmas song for 2010 because I was feeling like I had to write something. I tried to sit down and write, and what I came out with was a Christmas song. I'm not really sure what the next round is going to be.

Ryan Adams has this process where he gets up every day and writes a song. I think that's amazing and disciplined, and probably exactly what I need to be doing. I haven't. I think I need a little bit of a mental break now because it took so long to get this record out. We'll see. I'm hoping that something comes soon. 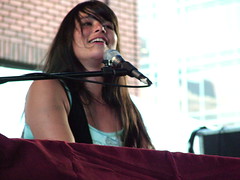 What kind of reception have you been getting from your audience with this new record? It came out last fall and you've probably had a lot of time to play those songs for people and to get that out there.

We haven't done that many tours. I feel like we're on a roll now. We did a brief record release tour just before it was released, which is always a little tricky because people don't know the songs yet. Then I did a Hotel Cafe tour with five other female artists. That was an amazing tour, but challenging in terms of my stuff because of having only four songs a piece. It didn't feel like a full showcase of the new stuff because it was so limited. Then we did a quick run of seven dates in December. So, I still feel like I'm sinking my teeth into the touring aspects of it.

We just got back from four weeks of Japan and Europe. It was really nice to be able to play the full record with all the new songs and get some feedback there. The audiences were really into it and very responsive. I feel like I'm just getting to know what the audience thinks. So far so good.

I was curious about it. I think I've gotten a lot of new fans who were drawn to this new record over the previous one, and I've probably lost a few. It's a darker record.

It's hard to be objective about it. Even with the last record, I think that my fan base wasn't necessarily formed around a huge radio single. The songs that seemed to rear their heads were things like "Quiet" or "Reason Why" or "Be Be Your Love." The songs that didn't get quite as much national attention were the songs that the fans were drawn to. I feel like I can try things out a bit with them. I think if I feel it, then there's a chance that they'll feel it, too.

That sounds very reasonable to me. I really feel for the musicians that seem to think that they have to keep doing the same thing over and over again so that they keep those fans that connected with them to begin with. It seems to sort of stunt your growth. The idea is that you're out there and you're creating something new every time. The people who follow you will follow you through it. The people who don't, don't.

Exactly. It's the business part. I had people saying that I shouldn't pick up a guitar because I was a piano-based artist. Imagine for me how limiting that would have been had I listened. It's like not getting a new limb or something. Keeping the business as far at bay as possible in the creation process is the most you can hope for. There's no formula for it. If there were, certainly record labels wouldn't have a 5% success rate. It's a tricky thing. The business part and the creative part are very intertwined. Even your own head can get in it, thinking that if something works once you should do it again.

Back in the day, all an artist or band had to do was play concerts and record albums. Now there are many "new media" ways to connect to fans. What approach have you taken with this? Do you think it effected the reach of your music?

When I had a lot more free time — I had split with a manager and was in between labels — I wasn't able to tour. You know how the fishermen mend their nets when they can't go out and fish? I really got into MySpace. I was all over it, answering messages and connecting with people in this great way to have access to people I had been dying to play for but wasn't able to at the time. I saw a big influx of activity in terms of people checking out my site and coming back, reading blogs, and this great word of mouth going on, even though I wasn't on the road and I didn't have a new record coming out. I saw how effective it could be. At the moment I've been quite terrible because once touring picks up, it's a bit of an insane schedule. I'm trying to write more blogs and at least post some pictures to keep up the speed a little bit. I think it can be really effective.

It does seem to take a lot of time, though.

It does. You can get very hooked on it. All the electronic age stuff is so amazing. I downloaded my first purchased movie to my iPod — I can keep it in my purse and whenever I'm stuck somewhere I can watch a movie. But then I thought, "Wait a minute. You're going to miss looking out a window or seeing the world." I'll get from Point A to Point B and not even know how I got there. I need boundaries for how many hours a day.

Do you have anything you want to share with your fans and potential fans that I haven't asked you about?

I'm very excited to bringing these songs to their town. The guys [in the band] are a blast. They're all incredible musicians. We have a little fairytale stage set up, which I'm happy about. Hoping to come play near you.