Harlan discusses "the titles of one of the great American artists of his generation."

Jan Harlan worked in Frankfurt, Vienna, New York, and Zurich with two companies dealing with business organization before joining Stanley Kubrick in 1969 for his project Napoleon, a film that was unfortunately never made. He stayed with Kubrick, becoming manager of his business affairs and his executive producer in 1973 working for Warner Bros. After Kubrick’s death in 1999, he worked with Steven Spielberg during the pre-production on A.I.: Artificial Intelligence and made the documentary Stanley Kubrick: A Life in Pictures for Warner Bros.

Harlan continues to be involved in the management of the Kubrick estate. Together with the Film Museum in Frankfurt, he initiated a large exhibition on the life and works of Stanley Kubrick that is touring the world. Frankfurt, Berlin, Melbourne, Gent, Zurich were past stations and right now they are enjoying a huge success in Rome. Eventually this splendid display will be merged with the Stanley Kubrick Archive at its permanent home, the University of the Arts in London. He worked with Alison Castle and TASCHEN publishers on a substantial and rather unique book on the work and archive of Stanley Kubrick. 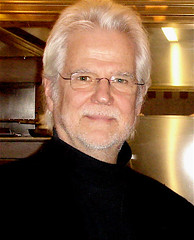 He has produced various bonus materials for Warner Brothers' new Stanley Kubrick DVD collection presently released in the USA and shortly thereafter around the world. His documentary film on Malcolm McDowell, “O Lucky Malcolm,” is an extra on the A Clockwork Orange DVD.

He was kind enough to respond to a few questions about the new set:

What are the origins for the new collection? Was it something Warner Brothers pushed for or was it the Kubrick camp?

The Kubrick family generally supports the wishes of Warner Bros. – they are the main “trustees” for the Kubrick legacy and own the titles of one of the great American artists of his generation.

Was it motivated by the HD format at all?

No doubt the new technology and the fact that more and more people watch films at home has an influence on marketing decisions.

Why does this set not include Dr. Strangelove, Lolita, and Barry Lyndon as previous Kubrick collections did? Are there any plans for new editions of those films to be released?

Dr. Strangelove belongs to Sony/Columbia. I can’t tell you why this is not included this time. This is a commercial and legal issue. I hope that Lolita and Barry Lyndon will come out in the future. These two films have not yet been re-mastered. I just received a unique interview conducted by Michel Ciment with Stanley Kubrick on Barry Lyndon which would be a perfect “bonus” item.

There are a lot of extras included with these DVDs compared to previous editions. Who now approves what gets added? Does WB say, "We’ve found these new items we’d like to include"? Or is the Kubrick camp responsible for licensing and creating this new material?

It is indeed the “Kubrick camp” which made a lot of material available. We always ask ourselves what Stanley would have wanted. Items that he himself had carefully preserved, like original conceptual drawings for 2001: A Space Odyssey, for example. I have no doubt that he would have approved the use of these wonderful designs at this point.

From what I have read Kubrick always seemed to be on top of technology. What were his thoughts on the DVD format, if any?

He would certainly have applauded the new technology, big plasma screens and HD DVDs. One can now get the full and intended impact of a film watching it at home, which was never possible with VHS tapes on old fashioned TV sets. Having said that, the problem of potential interruption and distraction remains, something that any director fears.

On a side note, are there any other Kubrick-related projects in the works fans can look forward to? Back when it was briefly leaked on the Internet, I had heard rumors of the Napoleon screenplay being released as a book.

You are right. TASCHEN publishers will bring out a comprehensive book on Stanley Kubrick’s Napoleon. Not just the script and treatment, which is not really revealing his true interest in person of Napoleon anyway, but also many pre-production details, designs etc. Stanley had 17000 images carefully collected, re-photographed on 35mm film and mounted in IBM cards for later sorting by clumsy machines. This was the state of the art in 1969. His library on the topic was huge and so was his knowledge.