Where have the cuddly teddy bears gone? The shocking practice of bear farming.

Interview: Dena Jones, World Society for the Protection of Animals, on Bear Farming

Practitioners of Traditional Asian Medicine (TAM) have used bear gall bladders and bile for 3,000 years, but it wasn't until the 1980's that the cruel, intensive farming of bears began. Though there have been positive developments with the Vietnamese government recently, bear farming still takes place in other parts of Asia.

It is estimated that at least 12,000 bears are trapped in these inhumane facilities inside tiny cages the size of their bodies and subjected to a lifetime of suffering and pain as their gall bladders are drained on a daily basis. In spite of the fact that there are a large number of natural and synthetic substitutes for bear bile — making bear farming needless — bears continued to be subjected to this inhumane treatment.

In this interview, Dena Jones, Program Manager for the World Society for the Protection of Animals (WSPA) US, talks about bear farming, the campaign against it, and what we can do to help these beautiful wild creatures from experiencing a lifetime of suffering.

Thank you for taking the time to answer my questions on this important subject, Dena. What is the origin of bear farming? When did this cruel practice begin?

Bear gall bladders and bile have been used in TAM for some 3,000 years. During the 1980s, the practice of extracting bile from bears held captive for this purpose became popular in a number of countries in Asia. Since that time, the marketing of and resulting demand for bile products has led to the introduction of the intensive “farming” of these wild animals.

The number of bears on farms has increased dramatically in recent years. At present it is believed that there are approximately 7,000 bears held on farms in China, 1,400 in South Korea and 4,000 in Vietnam, although the actual number could be considerably higher than official figures suggest, particularly in China.

What countries are currently involved in this practice? 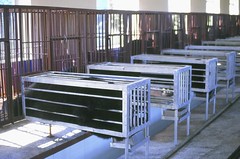 As mentioned, bear farms are known to exist in China, Vietnam and Korea, but some low level of the activity also probably takes place in other Asian countries. While the scope of bear farming is limited to Asia, the killing of bears for their viscera and the commercial trade in bear parts is a global problem.

Due to the decreasing number of Asiatic black bears left in the wild, gall for use in TAM now also comes from American black bears, Polar bears, Sun bears and Himalayan brown bears. Bears in North America, for example, are killed illegally ("poached") and their galls removed and smuggled out of the country for sale in traditional medicine shops in Asia.

What is the bile extracted from the bears used for?

Bear bile contains an active constituent known as Ursodeoxycholic Acid (UDCA), which on ingestion is believed to reduce fever and inflammation, protect the liver, improve eyesight and break down gallstones. The products of the bear parts trade can be divided into three categories: manufactured bile medicines, farmed bile powder and intact bear gall bladders. Intact bear galls are sold for the highest price. During a 2006 investigation conducted by WSPA, a TAM shop in Los Angeles was found to be selling a single gall bladder for $2,800.

As a result of the growth of the marketing of bear bile and the bear farming industry in Asia, bear bile is now being added to many non-medicinal products, such as wine and shampoo.

Isn’t there a substitute that can be used in place of bile for those who practice traditional Asian medicine?

UDCA, the active ingredient in bear bile, can be made synthetically, and it is estimated that 100,000 kg of this substitute is being consumed each year in China, Japan and South Korea, and that global consumption may be double this figure. WSPA actively promotes the use of both herbs and synthetic UDCA to reduce the suffering of bears on bear farms and the poaching of bears from the wild.

What exactly happens to the bears in these farms? 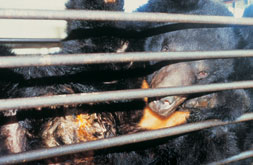 Extraction of bile from bears differs between countries, although all techniques result in serious animal welfare problems. In China the procedure involves the creation of a tissue duct, or fistula, between the gall bladder and the abdominal wall. Bile is collected by inserting a rod through the fistula, which then drains the contents of the gall bladder. To prevent the fistula from closing up, the wound must be constantly re-opened, usually once or twice a day. Bears have been seen with inflamed and bleeding wounds, open incisions for bile extraction and swellings in the abdominal area.

The most common method of bile collection in Vietnam involves the use of ultrasound equipment to locate the gall bladder. Once located, a long syringe is inserted into the bear’s abdomen to puncture the gall bladder. The bile is then siphoned off into a collecting jar. In Korea the extraction of bile from live bears is illegal. Instead, farmers breed bears and slaughter them in front of their customers to prove the authenticity of the gall bladder.

Many bears live in cages measuring around one meter wide, one meter high and two meters long (approximately three feet by three feet by six feet). Bears have been observed to be wounded and scarred from rubbing or hitting themselves against the bars of their tiny metal cages, where they cannot stand up or easily turn around. Prior to being used for bile extraction, bear cubs in many farms are trained to perform tricks such as tightrope walking for the amusement of visitors to the bear farms. At three years of age they are operated on to be farmed for their bile.

Is bear farming, and the commercial trade in bear bile, legal?

Bear farming is illegal in Vietnam but remains legal in China and South Korea. Products containing bear bile can be legally sold within these countries. However, international commercial trade from bear farms is illegal under the Convention on International Trade in Endangered Species (CITES). CITES is an international agreement between governments aimed at closely monitoring and controlling international trade in endangered plants and animals.

The legal status of the trade in bear parts within a country depends on the wildlife laws of that particular nation. For example, in the U.S. interstate trade in illegally taken wildlife or products from wildlife is prohibited, and 34 states ban the sale of bear parts within the state. Unfortunately, poaching of bears continues, in part due to the inconsistency of state laws and the fact that 11 states allow the sale and five states have no laws related to trade in bear parts.

How does the practice of bear farming affect bears in the wild – in Asia and elsewhere around the world?

All eight species of bears on our planet are regulated by CITES because they are either threatened with extinction or may be threatened if trade is not restricted. Five of the species are listed on Appendix I of the CITES agreement, which prohibits all international commercial trade in these animals or in products from them. With 75 percent of the world’s bear species already threatened with extinction, preventive measures are needed to protect remaining bears from a similar fate. The trade in bear parts puts pressure on small, isolated bear populations in particular.

One of the most common arguments made by the bear farming industry is that farming bears reduces pressures on wild populations, thereby aiding their conservation. It is argued that if the demand for bear bile is met by farmed bears there will be no need to hunt or poach wild bears. However, there is no evidence to support this claim of beneficial protection, largely due to an almost complete lack of information on wild Asian bear populations, particularly in China.

What is WSPA doing to end bear farming?

WSPA is pursuing a variety of approaches to reduce both the supply and demand for bear bile around the world. Through investigations, WSPA has helped to expose the cruelty of bear farming and the illegal trade in bear parts. WSPA conducted international undercover surveys of the illegal trade of bear bile products in 2000, and again in 2006. This research documented the extent of the trade in several western and Asian countries including the U.S., Canada, Taiwan, Japan, Singapore, Korea, Australia and New Zealand.

The organization has lobbied governments to take a strong stand against the bear bile trade and bear farming and also promoted the use of herbal alternatives to bear bile. Celebrities, like comedic actor Jackie Chan, have been enlisted to bring the anti-bear farming message to audiences around the world.

Have there been any significant developments in the campaign?

In 2005 WSPA reached a landmark agreement with the Vietnamese Ministry of Agriculture and Rural Development to establish a national task force to phase out bear farms in Vietnam. The agreement outlines the government plans for three main stages: 1) registering and micro chipping of all bears in captivity, 2) stopping the breeding of bears on bear farms and 3) enforcing the ban on the taking of bears from the wild.

WSPA has also funded the development of a bear parts detection kit to assist in efforts to enforce laws against the commercial trade in bears. The kits are currently being tested in Canada, Australia and the Netherlands, and plans are underway to trial the kits in Asia. Use of the kits will allow government officials to monitor the presence of bear bile in medicinal and cosmetic products and will help in determining the trade routes used to distribute bear bile products.

What can people do to stop bear farming in Asia?

Anyone using alternative medicine should ensure that they are not consuming products that contain bear bile (usually but not always identified by the word “ursus” on the ingredient list). Citizens or ex-patriots of Vietnam, Korea and China should communicate to government officials their desire that bear farming be phased out as soon as possible in these countries. Citizens of other countries can also help by asking their federal officials to encourage the Chinese and Korean governments to end bear farming.

What can teachers and parents do to teach children about these important animal welfare issues?

One of the best ways to address the mistreatment of animals is through improving human understanding of and attitudes towards them. One way to accomplish this is by encouraging the inclusion of humane subjects in educational programs. WSPA works across the education spectrum, from school age children to university students studying veterinary medicine and other sciences.

“IN AWE” is the WSPA program for 5 to 16-year-old school children, teachers, teacher trainers and curriculum developers. Working with governments, teachers and some of its member societies, WSPA has helped embed animal welfare into the school curriculum of several countries in Africa, Asia and Latin America.