Harry Potter and the Prisoner of Azkaban – Substantive Shadows 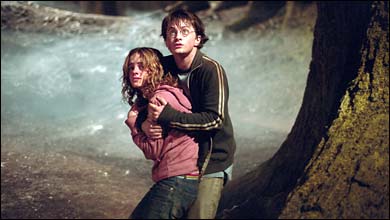 My wife, our 4 year-old daughter and I enticed my parents to watch the baby and darted the luxuriously short distance to our brand new cineplex (stadium seating, all that new crap), right here in burgeoning Aurora, to see Harry Potter and the Prisoner of Azkaban, and other than my lap falling asleep after two hours of hosting a not insubstantial tyke (she actually fell asleep about 7/8 through, not out of boredom – she kept declaring “I love this movie,” even through the scary parts, which were fearsome indeed – but out of sheer fatigue: no nap, we were at the 8:30 viewing, her poor little brain and body just shut down), I declare the experience an unqualified triumph.

I don’t recall EVER going back to a movie in the theater just because, but my first thought after Azkaban concluded with Harry’s square-jawed, now clearly teenaged face, frozen in exhaltation on the screen, was that this was a movie I wouldn’t mind seeing again, in the near future, just because I liked it and want to sit there with a vague smile on MY face for two hours again. And while I like movies as much as the next guy (unless the next guy is the Duke or Alan Dale or Matt Paprocki or some other damn cine-know-it-all), I rarely go to the theater (two young children, cable, DVD, hectic schedule, too far to go – although with the new Auroraplex, the travel time to the nearest farmer’s-market-o-film has been reduced from 15 minutes to about 5, 4 if i make all the lights in really good weather).

So, who knows, if I can find the time, we may go back – and that’s really saying something.

I won’t bore you with the facts of the story since if you care you already know (and these reviews give all that), so I’ll just give a few reactions.

First, as most reviewers have said, this is by far the most satisfying Potter film thus far as a cinematic experience. Being an iconclast I haven’t read any of the books (he said proudly and defiantly), so my knowledge and relationship with the magical Potter world is strictly through the movies, and owning both DVDs and having a 4 year-old, I have seen the first two many times and am very familiar with that world.

As I undertand it, the first two, directed by Chris Columbus, were much more literal in their presentation of the books, and this showed in the clunkishness of the pacing and rather creaky plot points, and as a result both films broke down toward the end. I never cared all that much about the plots in the first two anyway – which is not a great sign – but did revel in the relationships, the overall atmosphere of magical possibility, and the palpable sense that a world parallel to, and intersecting with ours isn’t such an implausible notion.

In fact, with the knowledge that the first two Potters are in the top ten of all-time movie money-makers, and all the books are multi-million sellers, the world of Potter is attaining the power of myth. Perhaps when enough people believe in something, it generates some kind of phychic reality of its own: like the Tolkien world, or to a nonbeliever, perhaps even religion. Is something not “real” just because it was first summoned from the imagination?

Anyway, while I agree that Azkaban director Alfonso Cuaron’s (Y Tu Mama Tambien, A Little Princess, Great Expectations) is the most satisfying film in the series thus far, it’s important to recognize that Cuaron’s film is in essence a reaction to the first two films, and could not have been made as such without the first two films to react against.

And those reactions are quite literally magical: while Columbus’s Potter world is ultimately grounded in whimsy (and is in some ways flimsy), Cuaron’s is grounded in wonder, and his darker, more penetrating, magic-realist take on that world is simultaeously more “realistic” – it simply feels more tangible, more fleshed out – AND more fantastical: it sort of engulfs the Columbus world from both sides.

But without the exposition, the character definition, the relationship building established by Columbus, Cuaron’s film would neither make much sense (much is done in shorthand) nor be very inviting (why would the students and teachers all so clearly love a place as forbidding and mysterious as Hogwarts, or, more broadly, even their broader, dangerous magical world?).

Having defended the often-maligned Columbus, allow me to now say that Cuaron exceeds him in every way: the cinematography is stunning in its Lord of the Rings-like vistas, palpable natural forces (especially water: lakes, rain, mist, even tears), the reenvisioning of Hogwarts as a blend of the Emerald City and the witch’s castle from The Wizard of Oz (the living paintings are especially effective). The characters all feel much more substantial and the acting is exceptional all around, especially David Thewlis as the supportive-but-troubled Professor Lupin, the new Defense Against the Dark Arts teacher whose knowledge of same is underscored with poignancy.

The kids are exceptional: Emma Watson’s lovely, assertive Hermione has been getting most of the critical attention, but Rupert Grint’s Ron has grown into a much more substantive figure, and Daniel Radcliffe’s Harry is literally the foundation of the film and the series, and he handles the complicated emotions of early teenhood deftly and without visible effort – he IS Harry Potter and has grown markedly as an actor: unlike the first two films, there isn’t one line in Azkaban that sounds rote or feels like acting as opposed to embodying.

John Williams’s music for Azkaban reaches new levels of depth and meaning, beautifully commenting upon and supporting the action and moods on the screen.

Finally, the sequence of action that ties together all the loose ends of the story goes beyond clever and seamless into the thought-provoking and brilliant, literally and philosophically providing an alternative perspective on the action and assumptions of the first 2/3 of the story. I recommend Harry Potter and the Prisoner of Azkaban without a single reservation.

UPDATE
I’m not the only Harry lover out there:

The boy wizard has worked his biggest box-office spell. “Harry Potter and the Prisoner of Azkaban” charmed audiences to the tune of $92.65 million in its debut weekend, the best results yet for the franchise, according to studio estimates Sunday.

“I guess audiences are still crazy about Harry,” said Dan Fellman, head of distribution for Warner Bros., the studio behind the franchise based on J.K Rowling’s fantasy series. [AP]

Another Update
Potter author J.K Rowling has her own new site, which is spiffy indeed, although I hate sites in Flash because you can’t copy anything.