Weird parallels between newly revealed gospel sympathetic to Judas and the Potter series.

Harry Potter and the Gospel of Judas

About 1,700 years after it was squirreled away, the National Geographic Society revealed with a grand flourish yesterday an early Coptic Christian text called the Book of Judas, which claims that the Betrayer was in fact a trusted confidant and collaborator with Jesus.

Unlike the account presented in the Bible’s New Testament Gospels — Matthew, Mark, Luke, and John — the new 26-page text, found in a codex that dates back to the third or fourth century A.D., states that Judas Iscariot was Jesus’ best pal and only betrayed him to the Roman authorities to fulfill Jesus’ own wishes. 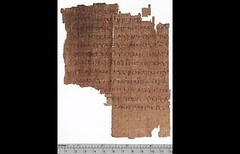 “This lost gospel, providing information on Judas Iscariot — considered for 20 centuries and by hundreds of millions of believers as an antichrist of the worst kind — bears witness to something completely different from what was said [about Judas] in the Bible,” said Rodolphe Kasser, the scholar who led the arduous effort to piece together and translate the Gospel of Judas.

The view presented here coincides with that of an early Christian sect, the Gnostics, who believed that secret knowledge shared by Jesus with his closest followers could help them rise shed the bondage of the physical world and return them to the spiritual plane from whence they came.

The text begins by stating that is a “secret account of the revelation that Jesus spoke in conversation with Judas Iscariot during a week, three days before he celebrated Passover.” Later in the text, Jesus tells Judas, “‘you will exceed all of them. For you will sacrifice the man that clothes me.'”

Okay, I freely admit my brain doesn’t function normally, but how many Harry Potter fans are thinking what I am thinking?

Will there be a Gospel of Snape? Throughout the Potter series we have been given two diametrically opposed views of Harry’s Hogwarts nemesis Professor Snape, who taunts and defies the young wizard cruelly in class, in school affairs, and as protector of Draco Malfoy, Potter’s hated rival and classmate.

Yet Snape — who we find out was the object of abuse and derision by Harry’s father and cronies in their school days — is also portrayed as Hogwarts headmaster and chief Good Wizard Albus Dumbledore’s most trusted associate and advisor. 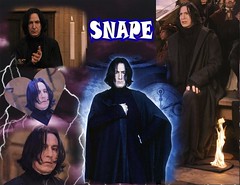 Is Snape a reformed follower of megalomaniacal mass murderer Lord Voldemort, working as a double agent at extreme personal peril to keep tabs upon the plans and movements of the recently reconstituted darkest of wizards and his coterie for Dumbledore? OR is he in fact a treacherous TRIPLE agent who spies on Dumbledore and the forces of good for Voldemort?

On some level Snape is clearly BOTH, but where do his deepest loyalties lie, with Good/Dumbledore or Evil/Voldemort?

The latter appears to be most bitterly the case at the end of the sixth and most recent book in J.K. Rowling’s series, Harry Potter and the Half-Blood Prince, wherein Harry and readers witness in — literally — frozen horror the climactic killing of a weakened Dumbledore atop the Astronomy Tower at the hands of Snape, the Half-Blood Prince of the title, who then flees with Malfoy and fellow attackers into the blackest of nights.

Potterheads everywhere are speculating how Rowling will resolve the character of Snape in the seventh, and reportedly final, book in the series: Was sneering Severus Snape, like this new version of Judas, in fact acting out the wishes of the betrayed? As Harry and Dumbledore rush back to Hogwarts after the Dark Mark has appeared over the school, Dumbledore says, “It is professor Snape whom I need.” Hmm.

Was the apparent murder part of Dumbledore’s grand scheme? Was Snape helping free Dumbledore from “the man that clothes him,” or is he simply what he appears to be: the most vile and duplicitous of murderous traitors? Of course even from that angle Snape is fulfilling the Unbreakable Vow he made to Draco Malfoy’s mother Narcissus to protect the boy.

Only Rowling knows for sure, and maybe she hasn’t really made her mind up yet.

A special about the discovery, translation and ramifications of the Gospel of Judas will air on National Geographic Channel, Sunday, April 9 at 8 p.m., and is the subject of the May edition of National Geographic Magazine. And of course there is a DVD and companion books.

Harry Potter and the Half-Blood Prince comes out in paperback July 25.

Book Review: ‘The Hitchhiker’s Guide to The Galaxy: The Complete Collection by Douglas Adams

'The Hitchhiker's Guide to the Galaxy: The Complete Collection' by Douglas Adams is a work of comedic brilliance everyone needs for their peace of mind.