"Welcome to the Jungle": wherever Rose happens to be.

Axl Rose — whose vocals were the worst thing about a pretty darn good, slashy, riffy, melodic, ambitious, Hollywood hard rock band about 20 years ago — was arrested by Swedish police early this morning for biting a security guard on the leg outside the Berns Hotel in Stockholm.

The 44-year-old rocker was all drunk and whatnot after a night of partying at popular Stockholm nightclub Cafe Opera following a "Guns N' Roses" performance at the Globe Arena in town. Rose is the only remaining original member of the group that recorded the seminal Appetite For Destruction album back in 1987, which has now sold about 20 million copies worldwide.

Rose "was arrested this morning and taken to a police station to sober up and be interrogated," Stockholm police spokeswoman Towe Haegg announced. According to reports in Sweden's Aftonbladet paper, Rose got into a spirited argument with a woman in the hotel lobby. "A security guard intervened, and Axl Rose hit and bit him. He also destroyed the decor of the hotel lobby," Haegg said. Rose also acted "aggressively" toward the police and had to be "handcuffed and restrained," according to Aftonbladet

Although Rose faces up to four years in jail if charged and convicted of "violent conduct," he'll "probably just get a fine," Haegg told AFP. 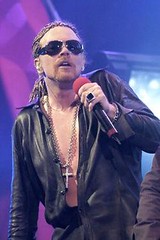 Regardless of the final adjudication of this episode, the trauma will doubtless delay the release of the band's mythical Chinese Democracy album for another ten years or so.

In May, big bad Axl got into a scuffle with 55-year-old fashion designer Tommy Hilfiger at NYC nightclub The Plumm: NOTHING says TOUGH like standing up to Tommy Hilfiger.