Blogcritics gets all-fashiony with a Gossip Girl giveaway.

Like OMG!  You know it and I know it, Gossip Girl is just the greatest show ever.  Like, EVER.  Every week there's some sort of new scandal or drug to be taken or a new sweater that is just to die for.  Seriously, did you see the outfit that what's-her-name had on in the last episode, but then that that other girl had that top on that was so last season.  What was she thinking?

I kid, I kid.  I kid because I care.  I kid because, quite frankly, I don't own anything quite so fabulous as what they have.  Oh sure, I do okay, but I just don't have anything quite as nice.  I mean, all I have is this swell Gossip Girl t-shirt… well, okay, I have two of them.  The real problem with that, my two Gossip Girl t-shirts, is that I don't get to keep them, I have to give them away to two lucky winners (one winner per t-shirt).

Can you believe it?  You could win one of these fantastic t-shirts, literally, right off my back.

Seriously, you pay attention when I tell y 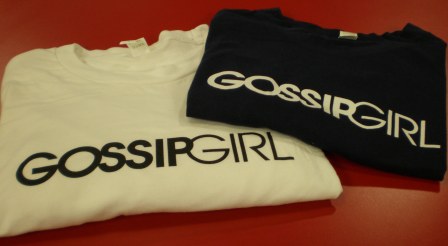 ou that Gossip Girl is coming back to The CW with all new episodes on April 21 and their fabulosity just may be unparalleled.  Then, you fill out the handy-dandy entry form below, and, if fate is with you, you will win one of these t-shirts.

It's amazing, it's fantastic, it's just, like, well, the coolest thing ever.

To recap:  Gossip Girl is back on TV with all-new episodes (find them on The CW starting April 21 at 8pm) and you can win a Gossip Girl t-shirt just by entering our little contest.