This is the two chart-topping bands first time on the same stage.

Veteran ’90s rock bands The Goo Goo Dolls and Counting Crows have announced a summer tour beginning June 15, which will take them to more than 45 cities. This is the first time the two bands have toured together. 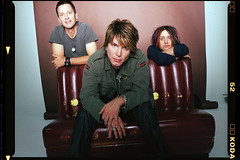 The Goo Goo Dolls recently released their eighth album, Let Love In, which contains the single “Stay With You.” John Rzeznik, Robby Takac, and Mike Malinin currently make up the trio that got their start as thrashy punkers in 1985. In 1987 they released their self-titled debut album.

The Buffalo, New York, natives have had numerous charting singles over the years reflecting a gradual shift to a poppier sound – “Iris” likely remains the most recognizable. Released on the City of Angels soundtrack, the song spent 18 weeks on the charts. In light of the success they later included it on the Dizzy Up the Girl album.

The Counting Crows burst on to the scene with the release of their album August and Everything After and the hit single, “Mr. Jones.” Recently they released the greatest hits compilation, Films about Ghosts: The Best Of… and will be releasing Counting Crows *New Amsterdam: Live at Heineken Music Hall 2003 on June 20.

In 2004, their song “Accidentally In Love” was featured on the Shek 2 soundtrack. Aside from becoming a number one hit, the song was nominated for a Grammy, Golden Globe, and Academy Award. The rootsy pop-rock band was formed by Adam Duritz and David Bryson, and also includes Charles Gillingham, Dan Vickrey, Jim Bogios, and David Immergluck. Millard Powers tours with them as bassist.

The Goo Goo Dolls and Counting Crows each spent a majority of the nineties topping the charts and dominating radio airplay; catching them on the same stage this summer should be quite a treat.