Kiefer Sutherland is signed as star, exec producer, and given a development deal.

Three things make the following mutual saccharine shovel survivable: 24 really is a viciously compelling show that once swallowed becomes lodged in the viewer like a fishhook, Kiefer Sutherland is the stolid but not unfeeling fulcrum upon which it turns, and Fox deserves full credit for nurturing the show through the lean times until it attained the full-fledged hit status the “serialized thriller” now enjoys in its fifth year.

Now to the goo: Kiefer Sutherland has signed a new deal with Fox to executive produce and star in three more seasons of 24, with Jack battling terrorists and somehow surviving (unless he becomes a TERROR-BUSTING ZOMBIE) through the 2009 season. E! is reporting the acting part of the deal alone is in the $40 million range, making The Man Who Plays Jack Bauer (for which he as received a Golden Globe award and four Emmy nominations) the highest-paid actor in a dramatic series. 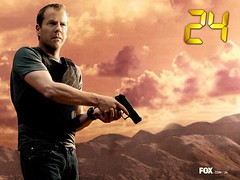 “The extraordinary support we have received … has made a difficult show like 24 succeed on all levels, and for that I’m truly grateful,” Sutherland said. He called his relationship with the show, “one of the most creative and rewarding experiences in my career … I am thrilled to extend my commitment to all my friends and colleagues at 24, and I’m looking forward to this expanded relationship with 20th Century Fox,” he added, referring to another aspect of the deal which grants the star his own production company and a two-year development deal with the studio.

Dana Walden, co-president of 20th Century Fox, gushed, “[Sutherland] is an extraordinary actor with amazing instincts, he’s fiercely intelligent and he has fantastic taste in material. When he told us he had ambitions to create and produce television series, we jumped at the chance to help him achieve that goal.”

“In his years on 24, Kiefer has demonstrated an incredible understanding of what makes for a compelling story or character, and he brings a passion to the process of making television that extends well beyond his own performance,” added Fox’s other presidential half, Gary Newman. “As the gifted producers of that show will tell you, he’s been instrumental in maintaining 24‘s exceptional quality over five seasons. We believe he could become every bit as accomplished a producer as he is a performer.”

Hey, maybe Sutherland-the-developer will come up with someting cool, but the main thing is Three More Years of Jack.

Allow me to assure you here and now: many and multi-ethnic will be the asses Jack kicks – sometimes they will be friends, just because; CTU will continue to have a rodent problem, with at least one mole per year scurrying treacherously about, pooping out pellets of pain against the good and noble; protocols will be scrupulously followed and disdainfully ignored, depending upon the weather, feng shui, and variations on the collective subconscious; women sincere and devious will come and go; agonizing decisions will be made on the nexus of life and death, typically adhering to a John Stuart Mill utilitarianism (Greatest Happiness Principle), but my friends, Not Always!

Tonight we find out if twitchy Charles Logan is indeed the worst rat bastard traitor scum president in the history of the union. I’ll be there.