Wife carrying for fun and prizes in Maine.

With a large crowd enjoying the spouse-hauling and foliage in full fall frenzy, Farra and Farra of Caribou, Maine, bested a largest-ever field of 27 couples — who came from as far away as Georgia and Colorado — over a 278-yard obstacle course featuring a water trough and log hurdles with an impressive winning time of 1 minute, 4 seconds. 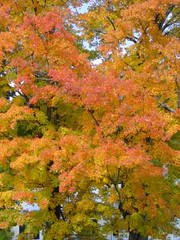 Competing couples needn’t be married but must be one each, male and female, and at least 21 years old, since a highlight of the grand prize is the “wife’s” weight in (sponsor) Redhook beer.

The Farra’s also snagged a trophy, five-times Tess’s weight (110 lbs.) in cash ($550) and up to a $1000 reimbursement towards a trip to the World Championships in Finland next July. 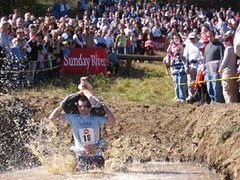 “We definitely plan on going to Finland,” said John Farra. “Training was key for me. One method I used was putting an 80 pound bag of cement mix in my backpack and running around the yard.”

Now he can practice with the beer!

Though teams can use whichever carry method they choose, serious competitors and all winners thus far have utilized the “Estonian” carry, where the “wife,” upside down, holds her husband around the waist from behind and tightens her legs around his neck, thereby freeing the husband’s hands for balance, grappling with obstacles, and what have you. 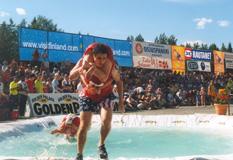 The Farras will be hard pressed to carry the World Championship in ’07. Estonians — they of the fancy carrying technique — have won the renowned race nine years in a row, and this year’s winner, world record holder Margo Uusorg, 26, has won it five times himself. “We don’t have a secret, we just try to run fast and hope the legs work,” said Uusorg modestly after his latest win.

Event coordinators claim deep roots for wife carrying in Finnish history, a simpler time when men were men and women were freight. In the late 1800s there was an outlaw in the area called Rosvo-Ronkainen, who is said to have accepted in his troops only those men who “proved their worth on a challenging track.” In those days, it was also a common practice to steal women from the neighboring villages. The first modern-day event was held in 1991 and foreign contestants were admitted in 1995.

Andrew "Test" Martin was found last night at his Tampa apartment by police. He was just 33.