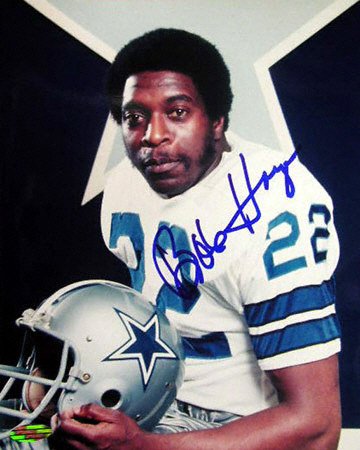 The great track and football star “Bullet” Bob Hayes died at 59. Another life of athletic glory and personal tragedy:

Hayes had a sparkling athletic career, and as a Cowboys receiver forced the rest of the NFL to change the way pass defense was played. But many of his accomplishments were later tainted by drug and alcohol addiction, which landed him in prison and was a big reason he was never enshrined in the Pro Football Hall of Fame.

At the 1964 Tokyo Olympics, Hayes won the gold medal in the 100 meters, tying the then-world record of 10.05 seconds, and he anchored the United States 400-meter relay team to victory in a world-record 39.06.

Hayes’ relay split was a sensational 8.6 and he earned the title “World’s Fastest Human.” Nearly 20 years later, The Los Angeles Times called it “the most astonishing sprint of all time.”

The record in the 100 meters was broken last week by another American, Tim Montgomery, who lowered the mark to 9.78 at a meet in Paris.

Robert Lee Hayes was born in Jacksonville on Dec. 20, 1942, and went on to become a track star at Florida A&M.

In 1964, the Cowboys drafted him in the seventh round, taking a chance on a sprinter with blazing speed but unrefined football skills.

Longtime Cowboys personnel director Gil Brandt, who recruited Hayes, remembers how quickly the sprinter made the jump from world-class track to pro football.

“Everyone was kind of apprehensive at training camp because that’s a lot different from the regular season,” Brandt said Thursday. “Then, all of a sudden, we got into the regular season and he did the same thing.

In his rookie season with the Cowboys, Hayes had 1,000 yards and 12 touchdowns while leading the NFL with an average of 21.8 yards a catch.

That showed his big-play ability, and Hayes’ world-class speed forced defenses — unable to cover him with traditional man-to-man schemes — to come up with many of the zone defenses that are common in today’s game.

When Dallas won the 1972 Super Bowl, Hayes became the only athlete to win an Olympic gold medal and a Super Bowl ring. More than 30 years later, he’s still the only player with both.

Yet because of his drug and alcohol problems – he served 10 months in prison in ’79 for delivering drugs to an undercover agent – he is not yet in the Pro Football Hall of Fame. This is a crime and the height of hypocrisy, or is Lawrence Taylor not in the Hall? I believe he is despite this record:

Taylor admitted to cheating on random drug tests in 1985 by slipping an aspirin bottle containing teammate’s urine into his jock strap.

On Aug. 15, 1987, Taylor failed an NFL drug test. Because it was his first offense, he wasn’t penalized but only received a warning. The following August he was suspended for 30 days for failing a second drug test.

Also in 1995, his business, All-Pro Products, collapsed. Because of stock fraud by two former traders, the company was worth practically nothing. It had been valued at $10.8 million after going public in 1993. L.T. lost several hundred thousand dollars.

In 1996, he was arrested in Myrtle Beach, S.C., for allegedly trying to buy $100 worth of crack cocaine from an undercover cop.

In 1997, he pled guilty to filing a false federal tax return.

He was arrested three times in 1998: once for failing to pay child support and twice on drug-related charges. In October, he checked into a rehab center after being arrested for allegedly trying to buy crack from an undercover office in St. Petersburg, Fla. In December, he surrendered to Teaneck (N.J.) police to face charges of possession of narcotics and paraphernalia.

In 1998 he also filed for bankruptcy to keep creditors from seizing his $605,000 house in Upper Saddle River, N.J.

Now that he’s gone, it’s time to at least give Hayes’ family some satisfaction. RIP, fastest man in the world.