July’s featured artist, Soul Asylum, will be returning to the music scene with their first studio album in eight years, The Silver Lining. The band was known for their garage alt-rock sound in the '80s and '90s, and in those first ten years they went from being a local Minneapolis punk band to platinum selling artists. The next decade found them gaining even more acclaim in the form of Grammy nominations and a Grammy win for the song “Runaway Train” in 1994. They released ten previous albums. 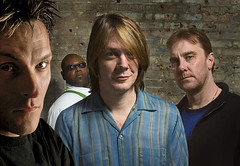 Their first commercial release came in 1984. Say What You Will, Clarence…Karl Sold the Truck was recorded eight years before they hit the mainstream, but garnered a lot of college airplay. It is the album that is truest to that original punk sound the band started with. The album was reissued on CD in 1991.

You start to see the transition in sound on their 1986 release Made to Be Broken. Best described as an indie rock album, it contains “Tied To The Tracks” and “Can’t Go Back,” two songs that are definitive examples of where their sound was headed. This album was also reissued on CD in 1991.

Say What You Will and Made to Be Broken were recorded in those early years when the band was still developing its sound and before mainstream public and radio took notice. Later this month we’ll take a closer look at the remaining eight albums in the Soul Asylum discography.

Karl Mueller, one of the founding members and bassist for the trio passed away from throat cancer in June of 2005 while working on The Silver Lining. Six of the tracks were the last he worked on and serve as a memorial to him and his part in the sound of Soul Asylum.

Regarding the CD, Dan Murphy was quoted in the press release as saying, “I’m really proud of this record. It’s a guitar record and it was really fun to record. It will always remind me of Karl when I listen to it. He was really sick, but still pulled through and finished it in Soul Asylum fashion.”

Dan took an interest in music and the guitar at 13, guided by his stepbrother who shared his record collection and began giving him lessons. A self-proclaimed introvert, music was as much an outlet as it was a passion. He cites Velvet Underground, Iggy Pop, and Aerosmith among his favorites.

That interest in Velvet Underground is something he has in common with co-founder Dave Pirner. Together with Karl Mueller they formed a punk band called Loud Fast Rules in 1981. Pirner served as the drummer, but by 1984 he moved to rhythm guitar and lead vocals. The instrumental change was not the only one. Their sound had changed and hence the name change to Soul Asylum.

With Mueller’s passing, Tommy Stinson stepped in to serve as bassist on the remaining tracks of the The Silver Lining. Michael Bland, a Minneapolis native, played the drums. His background includes credits with Prince and The Dixie Chicks.

The album was recorded exclusively in Minneapolis, the first time the band had done so in fifteen years and will be released July 11. Their Myspace profile contains streaming MP3s and their official website has upcoming tour dates, news, photos, and a discography.

In the coming weeks we will feature a complete detailed discography with reviews of the albums, an interview, and a review of their soon to be released album, The Silver Lining.

Another review of The Silver Lining  by Connie Phillips

A comprehensive discography of Soul Asylum which covers three decades of records.