As their single hits the airwaves and they hit the road with the Warped Tour, Red Jumpsuit Apparatus gets noticed.

Recently signed to Virgin Records, Red Jumpsuit Apparatus has been on the road to success since 2003. Recently they played at South by Southwest, Bamboozle Fest, toured with 30 Seconds to Mars and will be a feature on this summer’s Warped Tour. Their first album, Don’t You Fake It is due to hit the shelves July 18 and the first single, “Face Down,” will be launched on radio this month. For these reasons and many more, Red Jumpsuit Apparatus is a Blogcritics’ featured artist for the month for June. 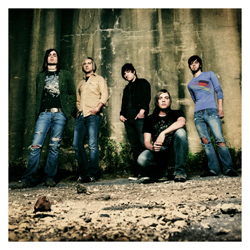 But who are Red Jumpsuit Apparatus? The youthful band, the members have an average age of 21, hail from the Jacksonville, Florida area. Their frontman is Ronnie Winter. Duke Kitchens and Elias Reidy are both guitarists, Joey Westwood plays bass, and their drummer is Jon Wilkes.

Don’t spend too my time trying to decipher some hidden meaning about the strange combination of words in the band’s name; according to Ronnie Winters, it means absolutely nothing. “I think it’s funny when bands scramble their brains and try and come up with some unique, untouchable band name.” Elias Reidy explains the importance should be place on the music instead.

Trying to force the band into one particular category can be difficult, too. Is it hard? It's more than that, it's a hybrid of metal and emo. Thrown in the mix, however, are melodic guitar and vocal lines which are at times reminiscent of alternative pop. Their forthcoming album contains everything from the pounding, driving first single, “Face Down,” which tackles the hard subject of domestic violence all the way to beautiful ballad, “Guardian Angel.” Both songs and every one in between dig deep and lay it all out.

About their music, Reidy says, “You kind of have to try your best to step outside of the box and be as unpredictable as possible to separate yourself.”

Winters adds, “But we like to mix unpredictability with the comfort and melody people want to feel when they hear a song.” And they accomplish the goal. Even when they are tackling the toughest of topics, there is a comfortable and common feel to the songs, without softening the edge.

When the band first formed in 2003, they spent the first 18 months focusing on their writing. When they finally did take the stage, there was no stopping them. They almost immediately had a fan following. Hopeful from the reaction to their live shows, the band recorded an EP, but it took a bit longer for the industry to have the same reaction as the or ever-growing fanbase.

They went through a series of ups and downs. Some members left and new ones joined, until the above mentioned line-up was in place. It wasn’t long after Joey Westwood came on as a bass player that everything really fell into place and they were signed to Virgin Records.

The band began recording Don’t You Fake Itlast year under the guidance of David Bendeth, known for his work with Hawthorne Heights and Breaking Benjamin. According to the band he was a driving force and guiding factor in the final product, pushing them to set their goals higher in the studio.

On Monday, June 5, MTV2 will be featuring an all day premiere of the video to "Face Down." Check both the channel and MTV2 Online for more details.

In the coming weeks, check back for a review of their debut album, an interview with the band, and a few other surprises. In the meantime, MP3s of tracks from Don’t You Fake It can be found at their Myspace profile.