After opening for Puddle of Mudd and My Chemical Romance, 30 Seconds to Mars is now launching their own tour. 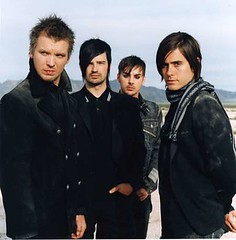 30 Seconds to Mars exploded on to the alternative music scene in 2002 with the release of their debut self-titled CD. But even before the album’s release, the band fronted by Jared Leto had received so much positive press that Puddle of Mudd booked them to open a six-week tour – sound unheard.

According to Leto, the band in its initial form began long before 2002.

We’ve always had 30 Seconds to Mars as part of our lives … It’s something we used to do as a very prog-rock approach. We weren’t interested in building a following or even having a name. We’d play shows and change our name every time. That completion didn’t interest us.(Jared Leto Online) 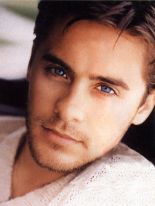 The “we” is he and his brother, Shannon Leto who is the band’s drummer. As they grew older and more focused, 30 Seconds to Mars was born. The two brothers put together the self-titled album themselves. Shannon on the drums, and Jared did everything else including mixing the CD on his own computer.

The album 30 Seconds to Mars was everything the unique name implies. It has a very sci-fi and abstract feel to it. The music is digitalized in places to fit with the theme. “Capricorn (A Brand New Name)” for example, has a heavily synthesized opening, reminiscent of computer sounds. It’s not overdone, however. The entire album is predominately heavy and hard, and the digital effects are just that – effects.

“Fallen” is a good example of just how talented a songwriter Leto is. The lyrics are poetic and metaphoric. The first verse uses images of being in outer space to represent a deeper darker place deep within himself which becomes evident in later verses. Backed with commanding guitar riffs and drum lines, the entire sound is heavy, in a literal sense. It’s as if the music has weight and is pressing down on you. And it’s a powerful weight with substance.

When it came time to record the second album, it was time for the band to grow. Tomo Milicevic was added on guitars and Matt Wachter on bass. The two members were anxious at first, not exactly sure what their roles would be in a band that Leto had handled alone for many years, but were pleased to discover it was to truly become a group project.

When asked about joining up with the Leto brothers, Milicevic said,


First of all, I was a huge fan of this band. Like, I was a hard core 30 Seconds to Mars fan. And, when I got the opportunity to be in the band, it was a total dream. But I remember when they were first out and about, that they were really kind of staying under the radar … But, now that we’ve proven ourselves, we’re putting ourselves out there more. (audioabraion.com)

A Beautiful Lie was produced by Josh Abraham who won a Grammy for his work on the Velvet Revolver album. And Jared brought 40 self-penned songs into the studio, actually six studios were used through the course of the recording. Eventually the track listing was whittled down to the ten listed plus two bonus songs. Turning a bit from the dark fantasy theme of 30 Seconds to Mars the songs on A Beautiful Lie are deeper, personal, and emotional but still dark.

Here is a full review of A Beautiful Lie that was published recently as part of our “Featured Artist” coverage. Another review was contributed this past December as well as an interview with Shannon Leto by Blogcritic writer, George Dionne.

Aside from the initial break of opening for Puddle of Mudd between CDs, they also opened for Audioslave and My Chemical Romance. With the release of A Beautiful Lie, 30 Seconds to Mars has launched a headlining tour dubbed “Forever Night Never Day.”

*Stay tuned for more on our Featured Artist, 30 Seconds to Mars in the upcoming weeks.