Stumbling out into the crisp, hushed, pre-dawn gloom before 6 a.m. this morning, I gasped audibly as a huge limpid moon hung just out of reach over the back fence, gloriously circular and radiating an energy I could feel swelling in my chest.

No wonder people have attributed every manner of influence over the affairs of man and beast — from insanity (“lunacy”) to casino payouts, earthquakes, and lycanthopy — to this beguiling, commanding figure with the power to transform the night into a silvery simulacrum of the day and to pull tides heavenward from the skin of the seas. 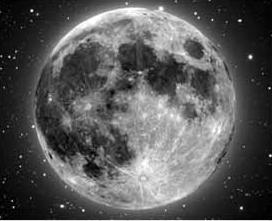 And it wasn’t even the full moon! The storied Harvest Moon, the first full moon following the autumnal equinox (on or around September 23) in the Northern hemisphere, rises to its full glory tonight beginning around 6 p.m. and attains its maximum shadow-casting orbular effulgence at 11:13 p.m. ET.

To top off tonight’s lunar manifestation, in addition to being full onto bursting, the earth’s only satellite will be 12% larger than some of the full Moons this year because it is near perigee, the point on its slightly oblong orbit that is closest to Earth.

So not only will this Harvest Moon appear bigger when its rising from the horizon in the east tonight (called the Moon Illusion, for some reason the Moon appears larger when it is near the horizon than when it is higher in the sky), this one will actually be one big bloated bopper by which farmers can frolic in their fecund fields into the very visible night, picking pumpkins, peas, peppers, potatoes, and paw paws in plainly perceptible plenitude until the wee hours.

Typically, the Harvest Moon occurs in September, but about every four years it bleeds over in October, occurring at the very latest by October 8. The moon rises very early in the evening this time of year, so there is little or no darkness between sunset and moonrise making things all the more convenient for those madly garnering farmers with fields full of ripened bounty. 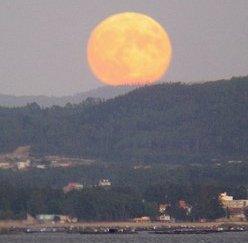 In addition to the Moon Illusion, moonlight plays some other interesting tricks. Go out in the full moon tonight and if it is clear, your field of vision will be very well lit – the Moon will even cast shadows. But that light will be eerily devoid of color, just finely differentiated shades between black and white like an old TV show or movie. Most people also can’t read in moonlight.

Why? The retina of the human eye is like a digital camera with two kinds of pixels, called rods and cones. Cones allow us to see colors and fine details, but they only work in bright light. Rods take over in lesser light and are responsible for our night vision. Though extremely sensitive, rods can’t detect color nor the fine details required for reading – great for harvesting, though!