Lindsay's little sister released a Christmas Album and Blogcritics has five copies to give away.

Blogcritics is proud to celebrate the release of Ali Lohan's Christmas CD, Lohan Holiday, by giving five lucky readers the chance to win a CD and poster prize package.

At the age of three, Ali — Lindsay Lohan's now 12-year-old sister — broke into the business in the very same way as her sibling, as a Ford Agency model. Following Lindsay's lead, she went from print ads to small acting roles, to music. In 2005, her first single, "Rockin' Around the Christmas Tree" was included on Totally Awesome Christmas with the likes of Hilary Duff and Jesse McCartney. This year she is releasing her own full-length holiday CD.

Lohan Holiday contains some of Ali's favorite classics and five new Christmas songs. In a recent press release Lohan said, "The music on this record is inspired by my favorite time of the year when I can gather with friends and family and celebrate the Christmas season. I am very proud of my new album and extremely excited to introduce my music to my fans."

Lohan Holidays will released November 21, and includes the hit single "I Like Christmas" and the holiday classics "Deck The Halls," "Jingle Bells" and "Silent Night." You can hear a streaming MP3 or watch the video to the single. 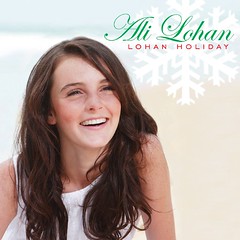 Let us take a cue from our gay brethren. Civil unions are where it’s at.