What might possibly be one of the earliest sex toy ever found: here. “A sculpted and polished phallus found in a German cave is among the earliest representations of male sexuality ever uncovered, researchers say.”

“The 20cm-long, 3cm-wide stone object, which is dated to be about 28,000 years old, was buried in the famous Hohle Fels Cave near Ulm in the Swabian Jura.” The size of it suggests that it was used as a sex aid. 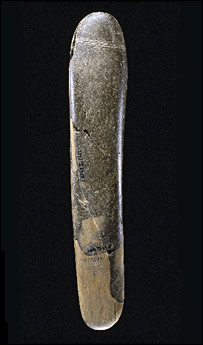 But, it could have also been used for other purposes beyond sex. “In addition to being a symbolic representation of male genitalia, it was also at times used for knapping flints,” explained Professor Nicholas Conard, from the department of Early Prehistory and Quaternary Ecology, at Tübingen University.”

There have been other discoveries of phallic artifacts, but none so accurate and almost none so male-orientated. “Female representations with highly accentuated sexual attributes are very well documented at many sites, but male representations are very, very rare,” explained Professor Conard.”