Sometimes movies are able to catch lightning in a bottle; Walk The Line does just that.

It’s late in the spring for it but we’re finally getting our first thunderstorm of the year. One-thirty in the morning, and I’m listening to the rumbles of noise rolling around up in the clouds and the rain pouring out of the holes of the guttering on the house next door. What’s really nice is the way it manages to block out most of the other noises in this town that people call a city. 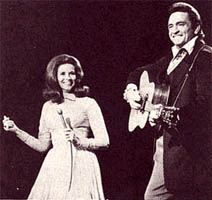 You can almost believe that you’re anywhere listening to a thunderstorm; they become the environment so much, that they are all that exist. Although I’m sitting in my kitchen in Eastern Ontario, I can pretend I’m anywhere else in the world with no problem. Thunder and rain. Rain and thunder.

Sounds like I’ve got the beginning of a country song there doesn’t it? I was sitting in my kitchen/thunder and rain all around/thinkin’ I could be just about anywhere/But if you aren’t there beside me/What’s the point of being there/just too much thunder and rain.

Well, I never said I could write song lyrics, let alone country song lyrics, but I finally got to see Walk The Line last night on DVD, and my mind is still tumbling around from the experience. The performances, the music, the love story, the pain, and it was all packed into just over two hours of film. Damn it was a lot to take in, almost too much.

But maybe that was the point too. That’s what Cash’s life was like, so much to take in it was overwhelming. The poverty, the death of his brother, his father’s abuse, the celebrity, the guilt, the pain, and of course, the love.

If Walk The Line is anything it’s a love story about two people finding themselves and each other and making each other happy. The love, as depicted by Reese Witherspoon and Joaquin Phoenix, of June Carter and Johnny Cash looked to be something so tangible that if you were with them you could have reached out and touched it.

When you look at the fact that Johnny only lasted three or four months without her, and hurried out of this world to join June, you can’t help but believe what you see up on the screen. Watching Reese Witherspoon and Joaquin Phoenix performing together on stage for the concert footage of the film was seeing perfect harmony in action. Nobody could look at those two and not doubt that the characters they were portraying were made for each other.

When he’s in her presence it looks as if all the cares of the world have been lifted off his shoulders. You can see an almost visible lightening of his spirit when she walks in the room. In return he offers pure unconditional love. There is, of course, the slight hitch that they are both married to other people and have children by those marriages.

There is no real suspense in the matter, as we all know she becomes June Carter Cash. But that does nothing to diminish the quality of the portrayal of the road that led them to that moment when they were finally able to join together. 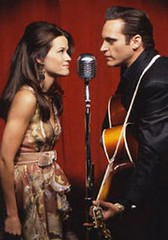 A word or thousand about the work of Joaquin Phoenix and Reese Witherspoon in the roles of Johnny and June; brilliant is a good starting point, but even the most flamboyant of superlatives probably won’t don’t justice to what either one of them created on screen. This wasn’t an actor attempting impersonations that, while impressive, run only skin deep. They created their characters from the inside out, developing a core that made everything that much believable.

As Johnny Cash, Joaquin Phoenix manages to capture not only his desperation to prove himself, but his insecurities, and the heaviness of spirit that drove him but also that fuelled his self-destructive nature. There is only so much self-loathing the spirit can take before it starts to implode.

He’s part genius musician, part scared and lonely child who’s waiting to be left alone, and spoiled brat who when he doesn’t get his way has fierce tantrums, trashing dressing rooms and destroying stage fixtures. But it’s in performing the songs of Johnny that Phoenix truly seems to transform.

From the opening “I’m Johnny Cash” to the way he holds his body, makes a little gesture with his head, and uses his guitar, Joaquin has assembled all the pieces of Cash on stage. Combined with the core of the character he has created, and without even attempting to imitate Cash’s distinctive voice, or looking like him, he still manages to convince us we’re watching The Man In Black himself.

I have only the vaguest of memories of having watched June Carter perform so I have no original with which to compare Ms. Witherspoon’s performance. But her work is brilliant. She doesn’t strike a false note in her characterization ever, staying consistent within the definition of the character that she creates from the beginning to the end of the movie.

It’s her ebullience that appeals to Cash; the contrast to his dourness calls out like a lighthouse beacon to a storm-tossed sailor and he’s swimming to it with all his might. Reese Witherspoon plays June’s mixture of desire, guilt, and anxiety that the times and her beliefs place her in. Johnny is already married and June can’t and won’t come between that.

Ms. Witherspoon is able to make June into a real person, beyond the image of the upright Christian as she has often been depicted. That’s not to say her devotion is not represented, but she’s turned into a three-dimensional human being just as fallible as the rest of us. For the first time, I felt I had an understanding of who June Carter was as a woman in her own right.

She wasn’t Maybelle Carter’s daughter or Johnny Cash’s wife in this movie. She was June Carter: a single mother with two children, survivor of two failed marriages and in love with a married man who has three children of his own and a serious drug addiction.

This is a warts and all movie that manages to avoid the pitfall of either sensationalizing the situation or making Cash into some sort of saint for overcoming his addictions. It’s ugly; he lies about his drug use to those he loves, even June, and he claims even until the last pill that they are just his prescriptions. It’s only when he bottoms out that June reaches out a hand to help.

There are a beautiful couple of scenes in the movie involving June and her mother and father running a drug dealer off of Johnny’s land with their shotguns and being there for him while he’s trying to live through the withdrawal. They act as the combination jailor and nurse that he needs to survive.

The movie makes it pretty obvious that without June, Johnny would have never been able to quit the pills. Without June he would have died back in the mid-sixties, like Elvis a waste of talent brought about by self-indulgence. It was Elvis who was handing out the Benzedrine on the first tour that, and it was Elvis who died of an overdose of diet pills and booze, and there but for the grace of June Carter would have gone Johnny Cash.

The thunderstorm has been long over, in fact the sun’s coming up now as I’m writing, and that’s appropriate too. Walk The Line may have been billed as a bio-picture of Johnny Cash, but it was more about the storm within his soul that was calmed by June Carter. She wasn’t a saint, which is okay, because saints don’t make good life partners, what with being martyred and all that they’re not usually around that much and have other things on their minds.

You could trivialize the story of June and Johnny Cash by calling the ultimate Country Music love song, but that is a disservice to the memory of something that was real and beautiful. Sometimes movies are able to catch lightning in a bottle and make, or at the very least recreate, magic. Walk The Line does just that with the love story of these two remarkable individuals.

Just a quick note on the DVD version that I rented last night, it wasn’t any of the special editions, so the only bonus features were some deleted scenes that really aren’t missed from the movie. I don’t have a DTS sound system, just a faked 5.1 surround, so I end up missing some of the softer dialogue. The picture quality was brilliant. I’m always disappointed when I go to a cinema and the image is grainy, so it’s nice to have the clear sharp images that a DVD gives.

I prefer a wide screen format when I watch DVDs because I like the panoramic view it supplies. I know it reduces the screen size somewhat, but I like the feel of being involved with something larger than life that it offers. It helps that the screen I watch on is 27 inches, because with anything smaller I would suggest going with the full screen version. The concert footage sound is perfect during the movie. They obviously worked hard on getting it to transfer over to tape well. The one time that Joaquin is asked to lip sync (when the band is recording and the music is being played over radios), it looks pretty obvious, so I’m really happy that he sang all his own music.