The first season of the classic series is now on DVD, but does it pass the test of time?

As more and more classic television series appear on DVD, a glaring problem has become obvious: while some of these shows were huge hits and very successful at the time, they don’t hold up to viewing decades later. What was once fun and great becomes terribly dated and stale.

Other TV shows, however, lose absolutely nothing. In fact, viewing them years after their initial release and noticing they are still clever, still relevant, and still fun provides a testament to the brilliance of those who created and took part in the series. 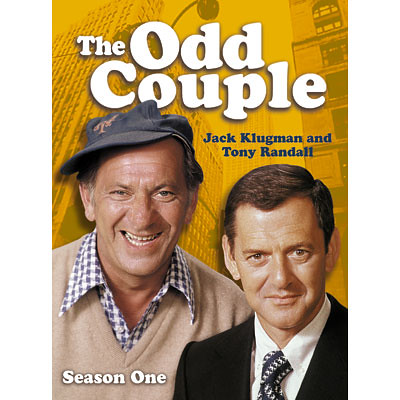 I am happy to report one of Time Life’s newest DVD releases, The Odd Couple – Season One fits squarely into the latter category. The series is just as fresh, just as clever, and just as wonderful as it has ever been. It proves itself to be completely timeless.

Felix Unger and Oscar Madison, portrayed by Tony Randall and Jack Klugman respectively, shine now as they did more than 30 years ago.  The jokes and the way they are told work exceedingly well and the only thing that dates the series (and this only remotely so) are the clothes the cast wears.  Of course, no small part of the kudos here should go to Neil Simon, who wrote the original play (and the screenplay for the film), for creating the two timeless characters.

Time Life and CBS DVD have done a great job restoring the footage; it looks crisp, clean, and almost completely unmarked. The colors are, more often than not, sharp and wonderful. There are problems from time to time, going into or coming out of a freeze-frame or during a fade-in or a fade-out, but they are all quite minor.

The extras included on the DVDs are also wonderful looks behind the scenes or stimulating trips down memory lane. It is on the first of the DVDs in the set that the best of these extras is to be found: a snippet of Tony Randall on The Mike Douglas Show prior to The Odd Couple’s premiere. Randall is funny, charming, and clearly in love with the show. In truth, it’s a reminder not just of what kind of a man Tony Randall was, but also of how great Mike Douglas and his show were.

Another extra features Jack Klugman providing commentary for what he says is one of his favorite episodes of the series, “It’s All Over Now, Baby Bird.” Though it is at times difficult to understand what he has to say, the trip down memory lane he provides is well worth any minor difficulties. The same is even more true for the commentary track Klugman provides for a clip of him accepting an Emmy for his work in The Odd Couple during the 1971 Emmy Awards. It becomes clear that Klugman was touched in a very real and profound way by his work on the show and the time he spent with his castmate, Tony Randall.

If there is a problem with this DVD set it is the introductions provided for each episode by Gary Marshall are both overly short and often rather silly, amounting to little more than “here’s another episode of The Odd Couple.” It almost feels as though he was more contractually obligated to provide these introductions than he had any real desire to do them. This is not true of the two episodes for which he provides commentary. Those are actually quite insightful, particularly the one for “They Use Horseradish, Don’t They,” which is the first one-camera television episode Marshall ever directed.

Despite any small issues the DVD release of the first season may have, it proves The Odd Couple was, and remains, a wonderful television series. It is as witty, fun, and wise as ever, and a solid addition to the library of any fan of classic TV.