Disney's version strays a bit from the books, but for the most part does so with good intentions. The extras make this set a must-have.

DVD Review: The Chronicles Of Narnia: The Lion, The Witch And The Wardrobe Four-Disc Extended Edition

When I was eight years old, my parents gave me the Collier Books paperback box set of The Chronicles of Narnia. It is the first collection of non-picture books I remember reading that were my own and not hand-me-downs or borrowed from the library. I still have them on my bookshelf, in spite of their worn and battered spines. Every so often over the past twenty-odd years, I have read them again. Sometimes I will read them all in order — mine are numbered in publication order — and other times I will read one or two of my favorites, depending on which is my favorite at the moment.

On the surface, The Chronicles of Narnia are children's books. However, they have enjoyed a broader appeal that spans all ages. Whether C. S. Lewis intended for the books to have a deeper meaning than simply providing entertainment is a topic of considerable debate. Regardless, my personal experience has been that each reading of the books brings some new aspect or meaning to light that I had not thought of before, which is generally not the case in most children's literature. 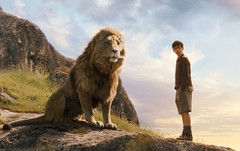 I remember being very excited to watch the BBC television adaptations of The Lion, the Witch, and the Wardrobe, Prince Caspian, The Voyage of the Dawn Treader, and The Silver Chair in the early 1990s, but ultimately was disappointed with the relatively cheap production and fake-ness of the Narnian creatures. I was equally nervous about the production of Disney's The Chronicles Of Narnia: The Lion, The Witch And The Wardrobe last year, and I was pleasantly surprised by the visual effects that seamlessly blended the live-action and animated characters.

The Lion, the Witch and the Wardrobe tells the story of two brothers and two sisters who are evacuated to the countryside from London during the World War II air-raids. 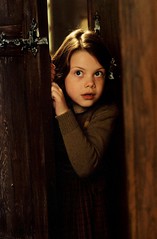 They end up in the large country house of an old professor who lives there alone with his stern housekeeper and a few servants. While exploring the house on a rainy day, they come upon a magic wardrobe sitting alone in an attic room. Not long after that, all four children end up in the wardrobe and are transported to the cold and snow-covered land of Narnia. From this point on, they are destined to become integral to the future of Narnia and the Narnians, and they have many adventures before returning to England.

Each of the four children are somewhat archetypical characters. Lucy, the youngest, is innocent, trusting, and honest, and only once does she waver from that. Edmund is spiteful and deceitful at first, and it is his redemption and transformation that provides the pivotal point of the story. Susan is dedicated to following the rules, be they the laws of nature or the laws of man, and her transformation is one of faith. Peter is given the responsibility of taking care of his younger siblings when they are sent away, and in Narnia, he is transformed from an uncertain boy into a hero and king. 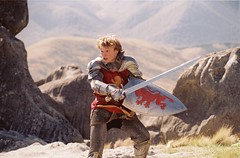 For the most part, the Disney version remains true to the book. The movie opens with the nighttime air-raid from the perspective of the planes doing the bombing and then shifts to the Pevensies dashing to the underground shelter near their house. A tearful scene in a train station follows, and soon the children end up at the Professors house in the country. All of this takes about five minutes or so of the movie, and in the book, the events are summed up in the first three sentences. This illustrates some of the difficulty the screenwriters must have had in adapting the book to the film. In a few short sentences, an author can paint the picture of an event, but often more time is needed in order for film audiences to grasp all of the nuances. In this case, the opening sequences quickly establish the personalities of the children and provide a context for the events that follow. 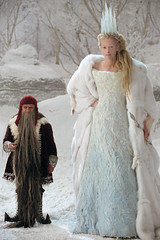 The final wardrobe event involves all four of the children entering Narnia, and this is the most notable difference between the versions. In both cases, they are trying to hide from the housekeeper. The reason given in the book is that they are trying to stay out of the way of a house tour. In the movie, it is because Edmund hit a cricket ball through a window. This difference may seem minor on the surface, but it results in depicting the children as being more divided and bickering than they appear in the books, and that theme is carried on through the rest of the movie as well.

The rest of the changes in the movie adaptation seem to be motivated by moving the story forward and providing tension to keep the audience engaged. For example, the chase scene across the frozen lake that ends in the encounter with Father Christmas is far more interesting to the viewing audience than a night spent sleeping in a beaver den.

The river crossing and encounter with the wolves is not in the book; however, it is one of the most dramatic sequences in the movie and left me wondering how in the world the filmmakers were able to pull it off. For those who are interested in that sort of thing, the extended edition DVD has a short documentary that covers all of the elements that went into creating that scene.

In the same way that the opening sequences of the movie took three sentences and fleshed them out, the battle that is given only a few paragraphs in the book is transformed into a breathtaking display of visual and other special effects. My favorite parts of the battle scenes are the rock bombing by the eagles and anything that involves the centaurs. Most of the noticeable additions in the extended version of the movie happen in the battle. Very little is changed or enhanced by the additions, but there are a few "whoa!" moments. 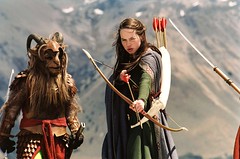 Thankfully, the DVD set is not just about the extended versions. There are so many extras included in this package that it seems unfair to think of them as simply being a few treats thrown in to entice buyers to purchase yet another edition of the movie. In addition to the actors' and director's commentaries, the first disc includes bloopers and some behind-the-scenes antics of the actors. With the exception to the effects enhancements and added scenes, the first two discs are nearly identical to the special collector's edition released last spring; discs three and four are entirely new content. The special features on the final three discs are as follows:

"Anatomy of a Scene: Behind the Battle"

There is an overwhelming volume of content in this extended edition; so much so that my initial seven hour marathon viewing session covered only the first two discs, including bypassing the audio commentaries. If the extras are any indication, the other two discs will be equally informative and worth watching.

The Chronicles Of Narnia: The Lion, The Witch And The Wardrobe Four-Disc Extended Edition is available for only a short period of time, it will not be sold after January 31st. The price tag may seem a bit high ($34.99 list) for one movie, but it really is more than just a single film, and is definitely an essential item for fans and collectors.