My introduction to the British murder mystery series Rosemary & Thyme was courtesy of another pair of names, French & Saunders. The two comedians had spoofed the show in one of their Back With a Vengance sketches, with the punch line having the series stars Felicity Kendal and Pam Ferris show up and take their revenge upon the comedians.

You wouldn't think that something as random as that would cause me to seek out the original, but then you don't know my love of British cozy mysteries, and this one seemed like just the right thing to scratch that itch for more. Turns out, my instincts were right.

Rosemary Boxer (Kendal) is a plant pathologist, formerly associated with a university, but now the co-owner of a highly sought-after gardening business. Her business partner, Laura Thyme (Ferris) is a former policewoman with a passion for plants, which comes in handy as the two seem to be constantly stumbling over dead bodies. Somehow managing to always be in the wrong place at the right time, the pair assist the police (whether they want them to or not) in solving the crime of the day. 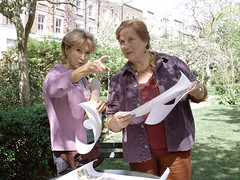 Each episode can stand on its own, although there is an over-arching story line that shows each of the two main characters struggling with things like family problems and personality flaws. Both characters are given equal screen time, but it is Laura who ends up growing the most over the seasons, particularly as she wrestles with her feelings about her ex-husband and navigates the stormy seas of her relationships with her grown children.

The locations for each episode are varied enough to keep from bleeding together into one massive English garden. And, there are several episodes that take place in more exotic locations such as Spain and Italy. Laura and Rosemary are challenged with all sorts of gardening problems, from restoring gardens based on old plans to creating something new and interesting for a drab municipal park.

Producer Brian Eastman wanted to create an amateur detective series unlike those previously seen. He thought that by making the lead characters gardeners — individuals normally seen only in the background and largely ignored — they could be placed in such a way that they could see or hear things that more visible individuals would not. He also wanted to show middle aged women taking charge of their lives and making them as full as they can be. In both regards, he has succeeded.

For television viewers not caught up in the obsession with young, sexy lead actors, Rosemary & Thyme is a breath of fresh air. In fact, according to IMDB, when the third season aired in New Zealand, it bested 24 in the ratings.

The show originally ran for three seasons, from 2003-2005, before ending rather suddenly due to lack of funding from ITV. I suppose that after 22 stories, either audiences had lost interest or the writers had run out of plausible ways that these two characters could encounter death and still keep on with their lives. Either way, the series ended with a story that showed the characters nonchalantly heading towards a new phase in their lives ("The Cup of Silence"), albeit one not quite as dramatic as the events that prompted their meeting in the first place.

An aspect of the show that I find very appealing is the relationship between Laura and Rosemary. Early on in the series, they addressed the social perception that the only reason why two grown women could care about each other is because they are romantically linked ("Arabica and the Early Spider"). With that bigoted and misguided stereotype thrown out the window, Ferris and Kendal set out to develop their character's friendship to be something deeper and stronger than what is usually shown on an episodic dramedy television series. The interplay between the two went from merely comedic to the kind of inside joke humor that happens only between very close friends.

As is typical of most Acorn Media collections I have seen so far, the extras included with the set are skimpy, mainly consisting of textual information about the series and the stars, with one rather entertaining trivia game based on the show. One gem in the extra material department is a brief interview with Kendal and Ferris that appears to have taken place at some point early on in the series, possibly before it had aired originally. The interview sheds some light on the conditions under which the actresses took the roles, what they think of the characters, and how the series has effected them so far. This can be found on the first disc, and I recommend watching it early on in your viewing, as it sheds a different light on the character development.

The series is currently in syndication in the US, so you may be able to catch an episode or two on your local PBS station. Of course, there's also this lovely DVD set, which would allow you to watch and re-watch each episode at your convenience.