The first of Eastwood's two Iwo Jima movies from 2006 comes to DVD.

DVD Review: Flags of our Fathers

Josh Lasser February 6, 2007 Comments Off on DVD Review: Flags of our Fathers 93 Views

Clint Eastwood’s Flags of our Fathers, the first of his two Iwo Jima movies from last year, explores the war and its aftermath from the American side (Letters from Iwo Jima provides the Japanese perspective). Wonderfully conceived and executed, the film takes a look at the battle through the eyes of three of the men who were pictured in the famous flag-raising and subsequently shuttled around the U.S. in an effort to sell war bonds.

The film is structured as a series of flashbacks as the son of one of the men involved talks to his father’s comrades-in-arms in order to learn what happened. Within this frame, the three “war hero” soldiers, John “Doc” Bradley (Ryan Phillippe), Rene Gagnon (Jesse Bradford), and Ira Hayes (Adam Beach) have their own series of flashbacks on the 35-day battle while on their trip to raise money for war bonds. If that sounds a little confusing, it actually all works quite well. 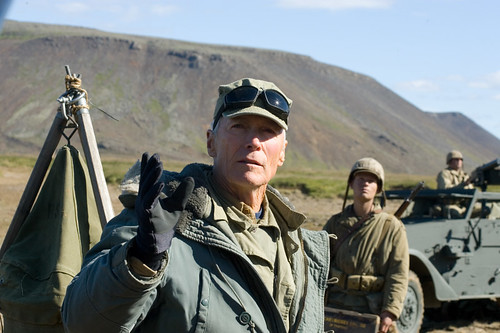 The movie explains that the picture of the soldiers raising the flag at Iwo Jima helped spawn a newfound confidence in the war and its direction. The government realized that the soldiers in the picture were instant heroes, and after discovering who they were, brought them back to the states in order to send them on a promotional tour. The government however failed to recognize that the soldiers weren’t raising the flag after they won the battle, and this wasn’t even the first flag raised on the island. Even after learning these facts, the three soldiers that were there and still alive went off on the war bonds tour, and were heralded as heroes. 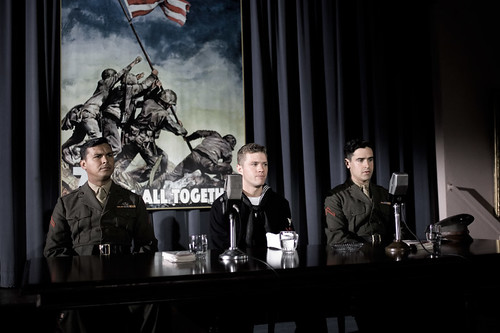 They further had to deal with the mental repercussions of fighting for a cause, which they might support, for a government that didn't care to hear the truth about what took place.  All the while, they were not able to properly mourn the death of their comrades. And, to top it all off, some of the incorrect soldiers were credited with raising the flag, but the U.S. government refused to rectify the names because the promotional plans were already in motion. 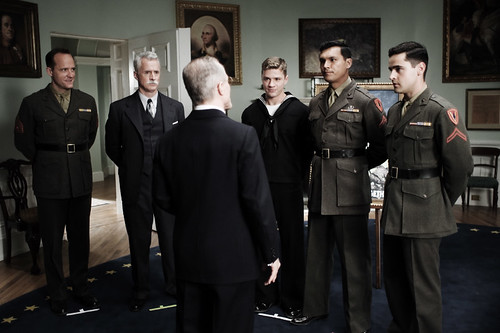 There are numerous scenes of the battle during the film, and while there is some blood and guts, Eastwood handles these scenes with aplomb; the movie never goes out of its way to show excessive gore, but doesn’t shy away from it either. Not all of it is easy to watch, but it is never gratuitous.

As a whole, the film serves as an example of how many people today can argue that they are entirely for the soldiers the United States currently has serving in the Middle East, but against the war. Eastwood shows his soldiers in an extremely positive light: they are not heroes, but are thrust into that role. 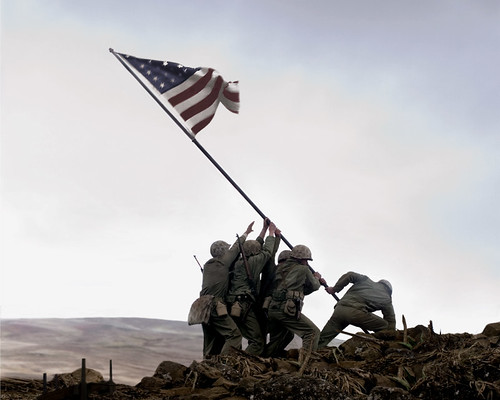 They all end up feeling terrible about selling war bonds when there are so many people still fighting, and about the misunderstanding that their flag was not the original. In short, the soldiers are hugely sympathetic characters, and the audience ends up rooting for them and against the “machine” that has them off promoting war bonds and lying about what actually happened. The government and army are most definitely made out to be the enemy as much the Japanese are. The film is very much pro-soldier and anti-war.

Clint Eastwood, through his directoral career, has made some outstanding emotional, thoughtful, provocative pieces. Flags of our Fathers may not be the best of Eastwood’s work (some would argue it’s not his best directoral feature in 2006), but it does rank very highly. The DVD release of the film does not include any special features, but the movie speaks for itself without the need for further insights.