What is an eight-letter word for a witty or clever verbal exchange?

Medicine has shown that alcoholism is a genetic disease, and I wonder if crossword puzzle addiction is the same. Both my father and my paternal grandmother are crossword fanatics, solving the local newspaper puzzle daily.

One of my father's most treasured gifts is a copy of The American Heritage Dictionary of the English Language that he received when he graduated from high school. He now has a copy of the new fourth edition that he frequently reads in bed. My grandmother, with an eighth grade education, will regularly finish the crossword puzzle in the Chillicothe Gazette in less than twenty minutes, although she does complain a bit about the computer and Internet clues and words. Given that, it is no surprise that eventually I would be bitten by the crossword bug.

Sudoku was my gateway drug, unless you count the logic puzzles that thrilled me in junior high. I was happily filling out the Sudoku puzzle in the local newspaper one day last fall when my eyes strayed over to the crossword puzzle clues. "I know that one," I thought, and that is when it all began.

Compared to the puzzle solvers in Wordplay, I am a late bloomer. Most of them have been solving puzzles of some sort since they were young children. However, they are also not your average crossword puzzle enthusiasts, since most of them are highly ranked puzzle solvers and constructors. 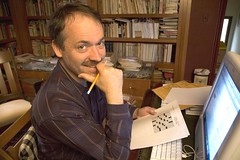 The documentary opens with a few scenes from the 28th Annual American Crossword Puzzle Tournament in Stamford, Connecticut (March 11-13, 2005). From there, the viewer is introduced to New York Times puzzle editor, Will Shortz. Shortz is also well known to NPR listeners as the Puzzlemaster for Weekend Edition Sunday. He provides some background on the New York Times crossword puzzle, as well as how he came to be the puzzle editor.

It quickly becomes apparent that while the documentary may be about crossword puzzles and puzzle enthusiasts in general, the New York Times puzzle is the central focus, mainly because this is the puzzle of choice for those who appear in the film. As Times puzzle fan and Daily Show host Jon Stewart puts it, "I will solve — in a hotel – a USA Today [crossword puzzle], but I don't feel good about myself when I do it." 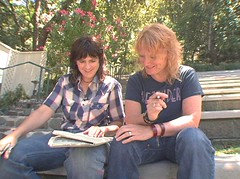 In addition to talking to celebrity fans like Stewart, musicians Amy Ray and Emily Saliers, and Bill Clinton, the documentary producers delve into the creation of a crossword puzzle, as shown by constructor Merl Reagle. Reagle briefly shares the rules and conventions of puzzle constructing in the film, and expands on them in greater detail in the companion book.

Like many new puzzle solvers, I was surprised to learn that one of the conventions of puzzle construction is that the puzzle must be rotationally or diametrically symmetric. This is both an aesthetic element, as well as a challenge for constructors to be creative. There are other rules and conventions besides that one, and learning about them has come in handy with my own puzzle solving. 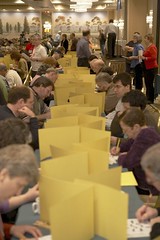 After the viewer is introduced to both the world of crossword puzzles and the top contenders for the American Crossword Puzzle Tournament (ACPT), the focus of the documentary shifts back to that 2005 competition. One might think that scenes of a banquet room full of people quietly solving crossword puzzles would be about as exciting as watching paint dry, and perhaps it would be if not for the excellent editing and production work done by Patrick Creadon and Christine O'Malley.

This was aided by the drama and excitement that surrounded the Division A Championship round. If you plan to see the film, I suggest you do not look up the final scores prior to watching it, since that will lessen the anticipation that propels the story.

One feature of the ACPT is the Saturday evening entertainment event called American Crossword Idol. At the 2005 event, puzzle solver and constructor Vic Fleming performed a song he wrote called "If You Don't Come Across" that is incorporated into the soundtrack of the film. The song is also used as the background music for the slideshow of photographs included in the extras, making it one of the most entertaining photograph collections on a DVD that I have seen so far.

Like many films that are currently being produced, the DVD for Wordplay includes a plethora of extra features that include commentaries, deleted scenes, and behind the scenes clips, as well as a few crossword puzzles that can be printed out. All of the extras are worth watching and often expand on elements of the final cut.

The companion book is also a must-have for puzzle fans. Along with the additional details not included or obscured in the final cut of the film, the book includes nearly all of the puzzles mentioned (and their solutions), as well as puzzles created by some of the documentary's constructors specifically for the companion book. Maybe when I get to the level of completing all of my local paper's puzzles I will try out some of the puzzles in the book.

Wordplay is informative and entertaining, even for non-puzzle fanatics. If you have not seen it yet, track down a copy of the DVD and watch it. Just be careful. If the puzzle bug bites you as a result of seeing the film, try not to let it consume your life.

Now, if you'll excuse me, I have a puzzle to solve.