It may be a small world, but it's an enormous earworm.

As I have mentioned before, communing with Disneyland on a regular basis was a cornerstone of my childhood in Southern California. My imagination and dreams were profoundly shaped by repeated contact with this self-contained world of manicured excitement and joy.

Placed at opposite dipoles of the experience were my favorite attraction, the Haunted Mansion, and the Fantasyland boat ride around the world with over 300 singing and dancing audio-animatronic cherubs, “it’s a small world” (yes, this is the official title of the ride – all lower-case, very twee). If the Haunted Mansion is the Magic Kingdom yang experience, then surely “it’s a small world” is the yin: an eternally cheerful, musically circuitous, passive, United Nations wet dream. 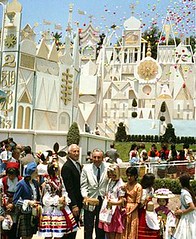 This Sunday, May 28, marks the 40th anniversary of the opening of that small world at “The Happiest Place on Earth.”

The Disneyland version of the attraction — with its 900-foot long gleaming white, blue and gold façade, and fanciful 30-foot high chiming glockenspiel clock tower — has been subsequently joined by clones at Walt Disney World in Orlando (1971), Tokyo Disney Resort in Japan (1983), and Disneyland Paris Resort in France (1992), ensuring that during every minute of the day its creepily happy happy joy joy anthem is playing somewhere on the planet. 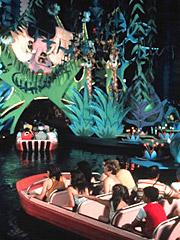 Inside the attraction the song is recycled in a soundtrack loop that is played, on average, 1200 times a day during a 16-hour operating day at each Disney Park. Therefore, the song is played over 4,800 times around the world during any 24-hour period. More than 100 million people have sat in a boat and had that tune (by the Academy Award-winning songwriting team of Richard M. and Robert B. Sherman – Mary Poppins, The Jungle Book, The Many Adventures of Winnie the Pooh, Chitty Chitty Bang Bang) and its uplifting message of unity through diversity — or vice versa — poured into their brains.

“Disneyland was the springboard for making our little tune a phenomenal hit,” said songwriter Richard M. Sherman, whose current projects include stage adaptations of Chitty Chitty Bang Bang and Mary Poppins, soon to debut on Broadway. “The song was originally written as a slow ballad and a prayer for peace and in 1966 the world was in a bad state of affairs so I think the song sparked and resonated even more … highlighting that we’re all together in this world and we’re more alike than we are different.”

And we’re all really small – and repetitive.

Disney itself has parodied the song. In the smash 1994 animated feature The Lion King, the villain, Scar, demands to be serenaded to improve his bad mood. His lackey Zazu begins to sing “It’s a Small World (After All),” prompting Scar to shout in abject horror, “No, No! ANYTHING but that!” The song is also japed in the “MuppetVision 3D” attraction at Disney Parks in California and Florida. 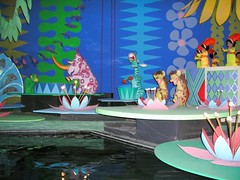 “The song’s perpetual cheery disposition may be grating on some nerves but there’s no denying it’s a catchy tune,” asserts Sherman somewhat defensively. Of course, his home doorbell plays the first few bars of the song, so keep that in mind.

Being added to the swashbuckling voyage where “dead men tell no tales” are Captain Jack Sparrow and his nemesis Barbossa, who will race amid the familar tableaux to claim a cache of plundered treasure accompanied by the inexorable strains of “Yo Ho (A Pirate’s Life for Me).”

Also making a guest appearance in the updated Pirates attraction will be the ghostly Davy Jones character from the Dead Man’s Chest sequel, and new special effects will also be added to the theme ride that premiered on March 18, 1967, in New Orleans Square at Disneyland.