Done in by Rathergate and the arrival of Katie Couric, Rather escapes the CBS News broom closet.

Having recently agreed to pay perky Katie Couric and her glam gams $15 million per year to anchor their evening newscast out of third place come September, CBS had no desire to let crusty, folksy Dan Rather, 74 — the man who held the anchor job for 24 years — out of the 60 Minutes broom closet where the dust made him sneeze and no one returned his calls. 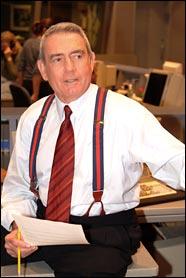 As a result — and because the feisty Texan can take a freaking hint — Rather announced he is leaving CBS News before his contract expires in November after he and the network failed to agree on a role for him going forward.

Rather was pressured out of the anchor job in March of ’05 as a result of “Rathergate,” a disputed 2004 60 Minutes II report about President Bush’s National Guard service.

Regarding Rathergate, the newsman and the network said, “On Sept. 8, 2004, Rather did a report for the Wednesday edition of 60 Minutes which raised questions about President George W. Bush’s service in the Texas Air National Guard. Included in the report were documents that purported to show that Mr. Bush received preferential treatment.

“But after further investigation, CBS could no longer vouch for the authenticity of the documents. Rather apologized for the report: ‘I want to say personally and directly, I’m sorry.’

“‘We should have been more rigorous in trying to establish the validity of the documents,’ said Rather, adding, ‘First and foremost is that four people lost their jobs over it. And I never have them far from my mind. I regret every nanosecond when I let anybody at CBS News down, and even more, when I let the audience down. It’s painful to me.'”

More painful still was mostly sitting around since then. “I leave now most of all with the desire to once again do regular, meaningful reporting. My departure before the term of my contract represents CBS’s final acknowledgement, after a protracted struggle, that they had not lived up to their obligation to allow me to do substantive work there,” Rather said in a statement. “As for their offers of a future with only an office but no assignments, it just isn’t in me to sit around doing nothing.”

CBS News announced that it plans a prime-time special dedicated to Rather’s career this fall, and that it would make a contribution to his alma mater, Sam Houston State. “Of all the famous names associated with CBS News, the biggest and brightest on the marquee are Murrow, Cronkite and Rather. With the utmost respect, we mark the extraordinary and singular role Dan has played in writing the script of not only CBS News, but of broadcast journalism,” said Sean McManus, CBS News president, in a statement.

“There will always be a part of Dan Rather at CBS News. He is truly a ‘reporter’s reporter,’ and he has helped to train several generations of broadcast journalists. His legacy cannot be replicated,” McManus gushed. 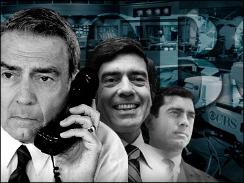 During his distinguished career with CBS News, Rather wrote six books, anchored six presidential election campaigns, and covered a dozen wars on five continents. In 1986 Rather was attacked and badly beaten on Park Avenue by a deranged man later convicted of murdering an NBC stagehand. Rather’s recollection of his attacker’s words, “What’s the frequency, Kenneth?” became the title of an R.E.M. song.

“Time has a way of introducing wisdom to someone’s legacy and history,” said former president of CBS News and now chairman and CEO of Sony Corp of America, Howard Stringer, of Rather.

“You’ll remember Dan for all those images of Dan on the front lines of every major story since the Civil Rights crisis – and being committed to the telling of those stories. That legacy will be a window into broadcast journalism that will become more valuable as time passes,” Stringer said.

Rather told the New York Times that he is considering an offer from Dallas Mavericks owner Mark Cuban to do a weekly news program for Cuban’s HDNet cable channel.