Courtney Love is on another rampage: Wednesday she flashed Letterman, then later tossed her microphone stand into the crowd where she was performing, braining a spectator:

Singer-actress Courtney Love was arrested in New York early on Thursday after throwing a microphone stand into a nightclub audience and hitting a man on the head, police said.

Hours before her arrest, Love, 39, known for her sensational, disruptive behavior, bared her breasts on the CBS “Late Show with David Letterman.” Love jumped on the desk used by Letterman for the late-night talk show and pulled up her shirt. She was not wearing a bra. [Reuters]

Police allege that Love hit Gregory Burgett, 24, of London, Ky., in the head as he watched the beginning of her show at the East Village club Plaid’s weekly “Kitten Club” rock ‘n’ roll night.

The club’s publicist, Claire O’Connor, said the microphone stand somehow “ended up in the crowd,” and Love “didn’t intend to hit this guy.”

“She went back to her dressing room, completely unaware that there was an incident and she was about to be arrested,” O’Connor said.

Love, 39, was arrested after Burgett needed three staples in his head and said he wanted to press charges, police and witnesses said.

She received a desk-appearance ticket and is due back in court on April 19. The two misdemeanor charges each carry one-year maximum sentences. [AP] 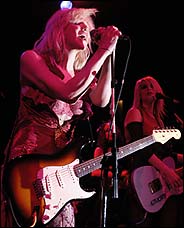 A photographer says she was hurt when Courtney Love dove off a stage, less than a day after the rocker was arrested for allegedly throwing a microphone stand at an earlier performance that injured a fan.

Freelance photographer Dara Kushner says she was injured when Love bodysurfed through the crowd during her performance at a Manhattan music venue late Thursday night. Kushner was treated for a bruised and swollen neck at Beth Israel Medical Center and released.

It wasn’t immediately clear if Kushner would press charges. [AP] 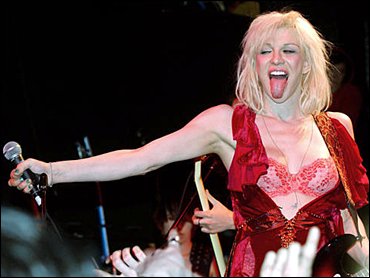 However, through it all, the NY Times’ Kelefa Sanneh thinks she’s tits:

….most of the fans and gawkers who spent two hours waiting for her to appear at Bowery Ballroom on Thursday night weren’t really there to hear her sing. Which is just as well, because she didn’t really sing.

`I’m sorry my voice is shot,” she croaked soon after she appeared onstage, struggling to get the words out. “Jail will do that.” Jail – or something – had sabotaged her guitar-playing, too, but no matter. She was brilliant, stumbling through a riveting, chaotic set full of pithy asides (“I want that thing that I kill people with,” she said, meaning she wanted a microphone stand) and grand, desperate gestures.

Over and over she rasped, “Take care of me!,” then surrendered to the crowd, letting herself be passed around like a life-size doll; eventually a pair of grim, dark-suited bodyguards waded in and extracted her. This is exactly the sort of exhilarating ritual that seems to sustain her, but she also leaves open the possibility that it’s slowly destroying her. That’s the sickening undercurrent of the Courtney Love show: maybe it’s our fault, too.

Her new album, “America’s Sweetheart” (Virgin), is an odd, appealing collision of precise hard-rock riffs and glassy-eyed screeds. Not surprisingly, these songs sound even better when they’re half hidden in a haze of jail-induced hoarseness and who knows what else.

….Ms. Love performed with her all-female band, the Chelsea, which includes the ferocious drummer Samantha Maloney (formerly of Mötley Crüe), who seemed a bit frustrated by all the chaos onstage.

But while Ms. Love was in no condition to sing, she did keep control. When one Love-struck young woman in a black dress tried to embrace her, she grabbed the fan by the neck and hissed, “Sit!”

The last song of the night was “Celebrity Skin,” an ambivalent ode to all things skin-deep. “Take care of me!,” she cried one last time, saying she wanted to crowd-surf all the way back to the bar. She succeeded but just barely (some security guards helped convey her the last few feet), and when she made it back to the stage she looked triumphant.

“You guys should be really, really proud of yourselves,” she said, sounding every bit like an actress thanking her supporting cast. Then she walked offstage, no doubt preparing for her next act.

Dan Aquilante of the NY Post more or less agrees:

“My voice has gone to hell,” she told the Bowery. “That’s what a jail cell does.”

Faces in the crowd confirmed her assessment, as they watched in slack-jawed horror the sheer ghastliness unfolding before them.

Verbal abuse like, “Get it right!” and, “You suck!” pelted the stage, prompting Courtney to apologize again and again for the horror-show performance.

Then suddenly, halfway through her 70-minute set, at the close of her controversial new song “All the Drugs,” Love had a sledgehammer epiphany.

“I’m gonna get crucified for this show,” she said, “so let’s have fun.”

And from that point on, she stopped making pathetic excuses for her raggedy chops, transcending her problems to create a beautiful disaster as pretty and horrible as the death throes of the Hindenburg.

And the show that sucked so hard that ears popped across the street from the Bowery Ballroom mutated into a mountain of rock ‘n’ roll attitude.

During songs like “The Plague” and “Never Going to Be the Same,” you stopped caring about her vocal flaws, caught up in her emphatic lyrics and delivery.

While others would have canceled the gig, too embarrassed to continue, Love conquered all with sheer force of will.

Her all-girl band often seemed as confused as the audience about why this Titanic performance continued. The drummer, who allowed the beat to flag during the Nirvana-like song “I’ll Do Anything,” was tongue-lashed by Love with the sharp order, “Play, bitch!”

That kick-started the entire band. The bassist stopped looking so bored, probably fearing she’d get the same.

As for the not-so-little drummer girl, her anger from the public humiliation translated into her best work of the night, as she pounded her tom-toms as if she were getting the chance to wallop on Courtney’s head.

As you’d expect, drama abounded in every aspect of this gig – right down to Love’s wardrobe. From the start of the show, Love had difficulty keeping her clothes on. She ditched her red velvet gown by song No.3, and performed in her bra and ripped pantyhose. She later asked for a T-shirt, then a skirt – and then another skirt, because, “This one makes me look fat.”

“Play, bitch” – I LOVE that. That’s why we can’t turn away: the worse she is, the better she is, but I am very concerned about that final act.

The 'Peanutbutter Sisters and other American Stories' by Rumi Hara is a diverse and exciting collection of stories.