Strawbs is on tour with their classic early 1970s lineup.

Strawbs got their start way back in 1964, as the Strawberry Hill Boys bluegrass band. They had success in the UK during the 1960s, undergoing several lineup changes but always led by singer-guitarist and main songwriter Dave Cousins. (Early on they worked with both Rick Wakeman and Sandy Denny). In the 70s the band moved away from its folk influences and towards a harder, progressive rock sound, achieving its greatest US and Canada success in that decade, with the Hero and Heroine and Ghosts albums.

Their set at BB Kings last night included "Round and Round," "Out in the Cold," and the dramatic "Autumn" suite, all from Hero and Heroine, and bang-up versions of "The River" and "Lay Down" from 1973's Bursting at the Seams. I especially enjoyed hearing the vintage synthesizer sounds from keyboardist John Hawken.

I was surprised at how well I remembered all these songs, considering the fact that I didn't own all the albums, and those I did own were on cassette and I hadn't listened to them in literally decades. 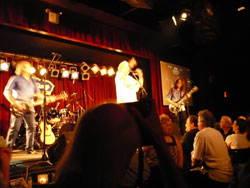 From Ghosts they did the sweet ballad "You and I (When We Were Young)" and perhaps my favorite Strawbs song, "Grace Darling," about the Victorian heroine of that name. Lead guitarist Dave Lambert sang a few of his contributions, including the rocker "Heartbreaker," and they reached back to 1972's Grave New World album for Cousins' "New World," another highlight of the set.

Songs from that era form the heart of a present-day Strawbs show, which is not surprising considering they're touring with the classic five-man lineup of that era. They do have a new album coming out this fall, however, and from it they played the socially conscious "The Call to Action" and the hooky title track, "The Broken-Hearted Bride," which featured powerful three-part harmonies. Though none of the Strawbs were ever what you'd call amazing singers, they sound wonderful together, and Dave Cousins' reedy, explosive, unmistakable voice hasn't changed much over the years.

He doesn't look too healthy, though. The rest of the band is fairly spry, but it can be a little difficult to watch Cousins from a seat near the stage. It's not that he isn't alert. The show went very smoothly, and when he once stumbled over some fast lyrics he laughed, muttered "Bollocks" (a word that's always hilariously pleasing to American audiences), and didn't lose a beat or bat an eye – but one somehow fears for him.

Still, I'm glad I finally saw a band that meant a lot to me in days gone by – and, I realized, still does – but that I never got to see live before. 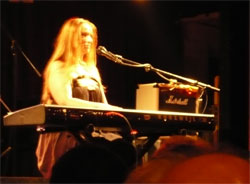 You know how certain melodies or riffs get planted so deep in the roots of your consciousness that they recur in your mind for your whole life, unbidden? Several Strawbs melodies are like that for me.

Singer-songwriter-keyboardist Judith Owen opened, playing solo. A collaborator of Richard Thompson's, she won over the audience immediately with a half-Tori-Amos, half-jazzy version of "Smoke on the Water," and kept us tuned in with her funny and engaging stage personality and exquisite vocal delivery. Her original songs, like the jaunty "Creatures of Habit" and the bluesy "Walking the Dog," were all winners in their own ways. Blogcritics' own Holly Hughes reviewed Owen's new CD recently.