I arrived at the Showbox a half an hour before the doors opened. The bar, where those of age could drink and wait, and get in before the hoi polloi, was warm and full of people. So I walked past to the nearby (air-conditioned) coffee house. My plans to wait there with an iced latte until the line started moving were foiled by the shop closing soon thereafter, so I went to wait in the line that now stretched around the corner and down the block.

The show had sold out weeks ago, and Craigslist had several "tickets wanted" posts. As I waited in line, I wondered what the "true" indie rock fans think of interlopers like me, buying up all those tickets and crowding the joint. I just like the music – I know very little about the culture.

The wait in line was blessedly short, and by the time I entered the Showbox, the standing room only floor was packed. Behind it on either side of the room were raised areas sporting some seating and the bars. I bought a beverage at one and happened to spot a middle-aged couple at a table with some empty chairs, and joined them to watch the concert from there. My seat afforded me a relatively head-free sightline to the stage, as well as a good vantage point for people-watching. Most of the audience members were in their 20s, with a small minority of older folks. I suspect that the start time had an effect on the demographic more so than the music genre.

At 9 p.m. right on the dot, the first opening act hit the stage. Grand Ole Party consists of Kristin Gundred (vocals, drums), John Paul Labno (electric guitar), and Mike Krechnyak (bass). Looking a bit like a school girl in her polka-dotted dress, Gundred sat down at the drum set, front and center, and said a few words in a soft voice that hid the strident one that came out when she started to sing.

Even though I am certain most of the crowd were there just to hear Rilo Kiley, many seemed to be getting into the groove/funk/soul of Grand Ole Party. Gundred sounds a bit like The Gossip's Beth Ditto, or Sleater-Kinney's Corin Tucker. My table-mate thought she sounded like Grace Slick. Regardless, her voice, along with the talent of her bandmates, made up for her less-than-stellar performance on the drum set. Given that she's been playing them for only about two years, and that she's also singing and leading the show at the same time, one can look past the simple patterns and focus more on the enthusiastic performance of the band.

"Look Out Young Son" is the lead track on their first album, Humanimals, and it was definitely the crowd favorite of the set. Most of their songs are short (under three minutes), and varied enough that the 35 minute or so set flew by quickly without dragging at all. I wish the same could be said of the band that followed them.

It was a quarter to ten by the time the second opening band started to play. Johnathan Rice is an odd choice for a band to sandwich between two indie rock acts. Rice's music is probably best pegged as roots rock – the kind that usually comes with a bottle of Jack Daniels and a worn flannel shirt. The audience grew restless during his set, and it wasn't until the band finished up with the mildly amusing sing-along "We're All Stuck out in the Desert and We're Gonna Die," that they received anything but a polite response. Rice would probably be better appreciated when opening for a band like Wilco or anyone on the Bloodshot Records label.

As I waited in the long interlude between the warm-up acts and Rilo Kiley's set, I reflected a bit on the experience of being at the show as it compares with others I have attended. I wasn't vying for a front row spot, so it was much less stressful. Also, I was far enough away from the speakers that I didn't worry about further hearing loss, and the room is such that I could still see the stage just fine.

The other thing I noticed that was different about this show, as compared to those put on by singer/songwriter types, is that neither of the lead singers of either band felt it necessary to preface most of their songs with any sort of chatter with the audience. All of the attention was focused on the music itself, and only that was used to create the connection between the performers and the listeners. 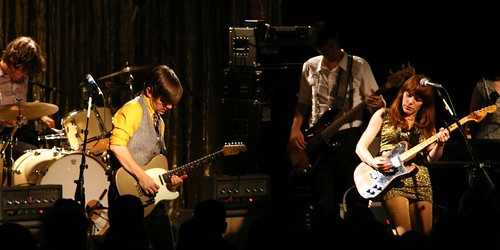 Finally, around 11 p.m., Rilo Kiley appeared to thunderous applause and cheers. I note the time because I am now over 30 and not used to having to be on my game at such a late hour. Unfortunately, this meant I heard only an hour of their set before deciding to head out while I still had enough energy to drive home. However, that hour was the best of the night and well worth the wait.

They opened with a crowd favorite, "It's A Hit," the lead track off of their last album, More Adventurous. This was followed by "Portions For Foxes" off of the same album; also clearly a crowd favorite. It appears on the Grey's Anatomy soundtrack, which may have contributed to a broader familiarity. The band mixed old favorites with some of the songs off of their new album, Under the Blacklight.

The nod to the 70s disco tune "Breakin' Up" lead into the disco ball delivery of "Dreamworld," in which the bassist's white shirt glowed under a blacklight. I wasn't sure whether it was in reference to the album title or simply a cool effect. 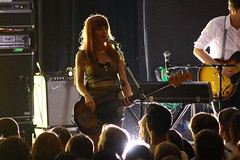 At that point, I was particularly struck by the "putting on a show" aspect of their performance. They seemed to be enjoying themselves, but one almost had a sense that they would be doing pretty much the same things they were doing, whether the audience responded or not.

Throughout the chorus of "Moneymaker," the lights flashed quickly like a strobe, which made for an interesting display, but also distracted me from really listening to the song. The same thing happened later on when three large balloons filled with confetti were sent out into the audience during the song "Silver Lining." Predictably, it wasn't long before they popped, sending a gasp through the crowd each time. We were all paying more attention to the trinkets than to the quality stuff happening on stage, which was disappointing, since I like that song.

If their set at the Showbox in Seattle is any indication, Rilo Kiley's tour for Under the Blacklight is one you won't want to miss. They put on a good show, with plenty of sparkle and sheen, but also with the substance of solid songs and skills. The band has rehearsed enough – they're ready for the big stage.