Two very good reasons for buying this package - great music and helping to support the fight against HIV/AIDS.

There was a time in the mid to late eighties when any of us who worked in the arts starting losing friends and colleagues at an alarming rate. HIV/AIDS was taking its initial deadly harvest, and in those early days the gay community, which was well-represented in the arts world, was being hit hardest.

Anyone with half an eye and a willingness to face reality knew that it was only a matter of time before the illness spread beyond the one community into the larger world. Controlling a sexually transmitted disease without being willing to talk about preventive measures like condoms and other means of safe sex is nigh on impossible.

The attitude of “it’s only a gay disease we don’t have to worry” pretty much guaranteed the spread of HIV/AIDS to its pandemic levels of today. Even as the eighties were drawing to a close, and more and more people from all walks of life were testing positive, little or nothing was being done to educate people in practical protection. You can lecture on abstinence and just saying no all you want, but it’s not going to stop people from having sex or shooting up.

Red Hot + Blue, released in 1990, was the first major, high-profile attempt to raise public awareness of the dangers and the reality of HIV/AIDS. Popular musicians were paired with innovative directors to create unique interpretations of the songs of Cole Porter. A CD of the music was compiled and released, including a few extra artists who had not recorded a video, while the videos themselves were aired as a television special on ABC in the United States and Channel 4 in the United Kingdom.

Interspersed among the videos were public service announcements by the artists involved and other public figures that provided bald, simple educational statements: use a condom, don’t share needles, and you can’t get HIV/AIDS by holding hands, kissing, or drinking from the same water fountain.

Proceeds from the sale of the CD were directed toward HIV/AIDS research, with the disc selling over a million copies. Beside the money that was raised, the whole project was an ambitious attempt to try and increase people’s sensitivity to the plight of those who were beset with the illness.

AIDS is a disease that knows no boundaries or borders. It rages on, transforming entire countries, even continents, into tragic zones of despair. Largely ignored by the media — and despite being almost entirely preventable — AIDS remains the worst medical and social crisis in human history… When I began doing press to promote Red Hot + Blue, everyone’s favourite quote was that we are the only company in the world that wanted to go out of business. A decade and a half later we still do. (John Carlin co-creator and director of Red Hot + Blue)

Well, 15 years later, Shout Factory records has released a special two-disc package of the CD and, for the first time ever for sale, a DVD containing all the material from that original television show. All the original content has been retained, including the messages from people like Richard Gere and John Malkovich; the animations between clips; and the short comedy sketches with their barbed points. 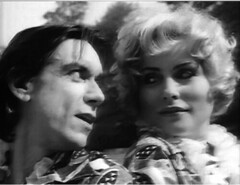 A Debbie Harry and Iggy Pop duet is something out of a Hollywood glamour agent’s worst nightmare. Their version of “Well Did You Evah!”, Porter’s very gossipy, semi-satirical take on the world of bored socialites, takes it to the extreme edge of reason. The world may be burning but it’s far more important to talk about the parties you’ve gone to, or maybe should have gone to.

Taken within the context HIV/AIDS this song, and all the other Porter songs chosen take on deeper layers of meaning. The videos accompanying the songs either act as a stage for the performer, tell a story that furthers the change of the song’s emphasis, or work as performance art that augments certain themes.

What I find most impressive is the attempts by the producers to be as international in flavour as possible, and diverse in the musical genres represented. Everything from the hard-core urban rap of The Jungle Brothers’ version of “I Get A Kick Out Of You” to Lisa Stansfield’s very straight jazzy approach has been used to try to reach as diverse an audience as possible.

One of the more poignant moments is the performance by African Salif Keita of “Begin The Beguine”. When this recording was made there was no way of knowing that in the course of the next 15 years Africa would become the continent most severely affected by the disease. Our knowledge of today’s circumstances only increases the implied irony of the song’s title.

One of the great things about international compilation albums is hearing a group for the first time. Red Hot + Blue gave me my first introduction to Les Negresses Verte. Their music is infectious, fun, and has the slightly crazy air to it of good gypsy music. “I Love Paris” is turned into a funny, boisterous romp laced with a sensual leer that the original never contained. I was immensely saddened to read that their charismatic lead singer, Noël Rota, better known as Helno, had died of a drug overdose only three years after this recording was made in 1993.

The most overtly political video on the disc comes from the band Erasure’s version of “Too Darn Hot”. The lyric “too darn hot” is used throughout the song as a means for introducing visual political statements. Sometimes news clips of demonstrations demanding funding, hand-lettered signs listing statistics, (which are chillingly low in their predictions), and denunciations of a system which prices lifesaving drugs out of the reach of those most in need.

I have to confess that I’m not much of a k.d. lang fan any more. Ever since she switched over from her cow punk to Celine Dion-type torch songs I’ve lost interest. But her rendition of “So In Love” was beautifully sung, and the video was heartbreaking. Watching her go through the simple motions of washing the clothes of a dying partner, wearing rubber gloves to minimise the risk of contact with bodily fluids, brought home the reality of those who are the primary caregivers.

The more I see of Tom Waits from that period, musically and onwards, the less I find to admire in his work. When I first went to see him perform back in the late seventies I liked his down and out jazzy blues singing. But over the years he has developed into a caricature of himself, to the point of being completely unintelligible. Such was the case of his version “It’s All Right With Me”. Whatever he was attempting to do or say has just been lost in what looks to be a sea of self-indulgence.

Aside from Tom’s misguided attempt, and my own personal issues with U2’s bombastic self-interest (we’re very important and sincere, you can tell because we’re always frowning and intense) the music on this CD and the videos on the DVD are wonderful. In very small print on the back cover there is a notice from the disc’s distributor, Shout Factory, which states that all royalties they receive from the sales of the disc will go to existing U.S. organizations dedicated to fighting AIDS.

This is not an attempt to cash in on a project from the past for self-interest, but a sincere effort to continue on with the work that the original project started. That gives you two very good reasons for buying this package; great music and helping to support the fight against HIV/AIDS.

You can preview the Debbie Harry and Iggy Pop video of “Well Did You Evah!” in both Small and Medium Windows Media format and Small and Medium Quick Time movie modes by following the individual links.