Ronnie Baker Brooks shows us the blues are in good hands for at least this next generation.

Being the son of a famous daddy can be both a blessing and a curse. In some ways, it leaves you in the position of being damned if you do and damned if you don't. If you make it, it's only because of your dad; if you don't, then you must be some kind of real loser.

It becomes doubly hard for a person trying to make it in a business where talent matters, but having a leg up is equally important. Unless you manage to distinguish yourself early in your career as being different from your famous parent, there will always be the question of how well you would have done without your papa.

Of course, it's patently unfair to heap expectations on somebody based on what their parents achieved as a performer, but human nature being what it is, comparisons between parent and child are inevitable. If you decide to compound your problem by embarking on a career in the same genre of creativity as your parent, you end up having to prove yourself in ways none of your contemporaries will ever have to face.

What really mystifies me about this attitude is the fact that, in a musical family, there is nothing more natural than a child following in a parent's footsteps. When you're the child of a musician, it's more than likely that your house is going to be filled with people playing music at all hours of the day and night. There's a really good chance you might even end up singing before you talk.

If you are Ronnie Baker Brooks, it means your house is going to be full of your daddy's (Lonnie Brooks) blues musician friends from the Chicago clubs, playing hot licks long into the night. "I grew up among the best of the best… Every time I play, I feel like I've got to do it with the authenticity and passion that I saw in guys like Buddy Guy, Muddy Watters, B. B. King and my father…"

I defy anyone with even only an iota of interest and talent to grow up in that atmosphere and not be interested in playing the blues. If you have any sort of drive, you won't be able to help yourself from starting out on a career in the blues. Anyhow, what ever happened to the tradition of music being an intergenerational family thing? The Carter Family wasn't just a nice name for a band, you know. 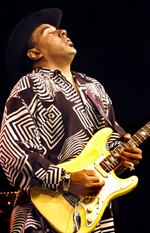 But in today's reality, Ronnie Baker Brooks will be Lonnie Brooks' son and judged accordingly. It doesn't matter that he paid his dues by playing in his dad's band for a dozen years before striking out on his own in 1998 with his first disc, Golddigger. Since then, he has worked his butt off touring extensively and recording a second disc in 2001, Take Me Witcha, gradually establishing his own reputation as guitar player and musician.

His latest release, The Torch, which will be released on August 22, 2006, is his way of acknowledging the debt he owes to the past while, at the same time, showing his commitment to developing his own particular sound. He's taking the flame of inspiration he grew up with and blazing his own path, and if this disc is any indication, it looks like he's going to take people on a hell of a ride.

First off, all those years of listening to the greats play and playing in his dad's band have sure paid off. He knows his way around the guitar like nobody's business. Hard and heavy, slow and moody, or fast and furious, it doesn't matter to him – he can handle it. But he's also more than just another guitar hero.

Taking the blues as his foundation, he's constructed songs that go off in widely divergent territories. "Be A Good Man" shows he can do a classic rhythm and blues song, which would put Sam Cooke to shame. We're not talking what passes for R & B these days, but the real stuff that makes your hips move so much you can't sit still.

The very next cut on the disc, "Train" is a great instrumental that starts with a flat out sprint of honky-tonk boogie-woogie music, takes a brief station break to add fuel, and then lays it flat out to the finish with guitar and organ blowing steam, until they pull up with a classic 12-bar blues break. Not only is it one hell of a ride, but it's a whole lot of fun. 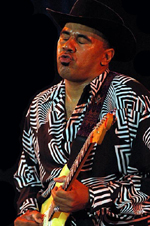 Of course, Ronnie Brooks also knows what the majority of his generation listens to – he says so himself: "When I grew up, all my friends listened to rap and funk, and I listened to the blues… I think we both saw some connection between them… It's a hip-hop world right now, but I want to bring a little blues to the party."

His choice of producer for this album reflects what he's attempting to do. Jellybean Johnson has worked with Prince and Janet Jackson in the past and brings that sensibility to some of the less bluesy numbers. But they don't let the edge get completely smoothed out; no matter how much polish has been applied, the grit of the Chicago streets can still be heard.

He even gives a nod to his old buddies by including a little rap in the song "If It Don't Make Money, It Don't Make Sense". In the hands of some people, throwing in different styles like this would sound like nothing more than an attempt at some instant street credibility. But because he has already shown his willingness to expand his horizons on other songs, and the fact it's not just an add-on but an obvious natural progression in the song, it works to show how the blues can be the building blocks for most popular music.

The closest the disc has to a title song is "The Torch Of The Blues" where Lonnie Brooks, Jimmie Johnson, Eddie Clearwater, and Willie Kent come into the studio and give their blessing in song to Ronnie. It's both funny and poignant given the good time they are all obviously having and the fact Willie Kent died shortly after the recording session took place. Both the song and Willie's death are indicative of the fact the music has moved on to the next generation.

Sometimes when we see the son following in the father's footsteps, we sniff around for the scent of nepotism. Does this person really deserve to be doing this, or is he just riding the coat tails of his old man? While it may be an accurate assessment in some cases, when talking about music like the blues or other traditional modes of expression, it only makes sense it's handed down from parent to child.

It's also reasonable to expect the child to put his or her own stamp on the music. This way, not only is the music kept alive for another generation, it also continues to grow and is prevented from stagnating into a museum piece. With The Torch, Ronnie Baker Brooks shows us the blues are in good hands for at least this next generation.