It's appealing to your desperate and depressed side.

CD Review: Sparklejet – Beyond the Beyond

One of the wonderful things about music is it is often a catalyst of emotions, not only through the lyrics but through tempo, arrangement, and delivery. It not only takes you back to a given place or time, touching on the most intimate sensations but it can evoke feelings. Love, sorrow, joy or in the case of Beyond the Beyond it is often tension, anger, or rage.

The newest release from Sparklejet is their fourth. The trio which consists of Wade Krause on drums, Victor Sotelo on guitar and vocals, and Geoff Anderson on bass vocals got it's start with their first album, Soap, in 1996. With songs like "Angels No Longer Cry," "The Day Belongs to The Sun," and "Rock and Roll is Sleeping" the tone was immediately set. Listening to the muddle of dreary music and dark lyrics you get a real sense at what their self described "anti-social punk" sound is about. 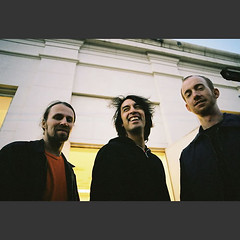 They followed up the initial release with This Year's Model in 1998 and Bar Guest in 2001 and stayed pretty true to form — angst driven lyrics set to pounding rhythms. If this sound or these previous releases are your type of music then Beyond the Beyond should be added to your collection immediately.

The dark and moody overtones of "This is Not Here" are established in the first moaning chords and only increases with the howl and cry of the bitter lyrics. The song pulses and surges as it pulls you down into a deep abyss of overwhelming gloom. "Message to My Ear" opens with what can only be described as ear splitting feedback, and again the tone is instantly set. As with all the songs on the CD there is no need for thoughtful consideration and interpretation. The stripped bare emotion is delivered without pretense. There is no clever innuendo or metaphoric puzzles. It's pure anguish driven rock.

An exception to the harsh and acidic overtones would be "Let's Behind That Place." The song is uncharacteristically jovial and upbeat, but its sliding guitar riffs give it a sharp guitar edge which keeps it from seeming out of place on the collection.

Overall, with this album Sparklejet is what they always have been — gloomy grunge like and punk influenced rock and roll. They sing to the sullen mind and attitude of your average late-teen or appeal to the desperate and depressed side that can lurk below the surface. It's expressive and is a one of those CDs you will want to put on when what you really feel like doing is breaking glass just to hear the satisfying shatter.