No need to worry about the future of the Blues, just look beyond your backyard.

A few days ago, an article appeared at Blogcritics.org where the writer worried about the future of the Blues. Her concerns were with what type of music the next generation were going to be playing and what would happen to the acoustic blues and more traditional variants of the genre.

Well Ruf Records from Germany seems to have been a few steps ahead of her, as last summer, they initiated a project that would see three young European artists come to the home of the blues to record. Aynsley Lister and Ian Parker are hot young guitarists from England, while Erja Lyytinen is creating a sensation, both at home in her native Finland and throughout Europe, with her hard and fast playing.

These three have been burning up Europe together as Ruf Records' Blue's Caravan for 2005 and 2006. Each season, Ruf will take a group of blues artists and put them out on the road together. This time around, it was decided to feature the future.

"Who will carry the torch when today's elder statesmen are gone? Who's going to follow in the footsteps of the B.B. Kings and Koko Taylors, the Buddy Guys and Eric Claptons?" asks Vincent Abbate in his write up for this year's tour. Obviously, those are pretty hefty shoes to ask anyone to fill, and heavy expectations to put onto a group of twenty somethings just starting out in their careers.

While they may not have the experience of their predecessors yet, they certainly don't lack for courage and enthusiasm. It couldn't have been easy to walk into two of the original studios where the music came from without some feelings of intimidation. But in the end, it seems the blues can win out no matter what the circumstances. 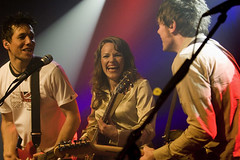 The resulting recording, Pilgrimage: Mississippi To Memphis, gives answer to all those questions that worry about the future of blues being the domain of hard rockers only. It's true all three young guns on this album can play hard and fast, but they also prove their sensitivity and understanding of the music's origins.

While the first cut on the disc "1010°" is a three gun assault upon the blues, with all three showing off their speed and power, track number 2, "All The Time", seems to rise right out of the Mississippi Mud with its almost gospel tinged chorus, and slow, funky groove. Guitar solos explode out of the soil once or twice, showing heat can burn slowly as easily as it can fast.

Songs like "You Don’t Know", "Too Much Too Hide", and "Mississippi Lawnmower Blues" show these three not only have the chops, they have the feel for blues. They can pull off the acoustic sounds that will make the purists happy and sing out with the best of them.

"Blues Caravan" is their take on being three young white Europeans playing black music where it comes from. Not only does it prove they have a great sense of humour, especially when it comes to laughing at themselves, but it lets them show off their ability to play a more traditional electric blues.

Are Aynsley Lister, Erja Lyytinen, and Ian Parker the next Eric Clapton, Etta James, and Buddy Guy? I hope not, for their sakes, because they should be their own musicians and not be content to imitate the styles of anyone who's come before. Every musician has to bring their own stuff to the blues or it won't be emotionally honest.

The blues are an attitude as well as a musical style, and it doesn't matter how fast or slow you play the guitar, whether it's an electric or acoustic guitar, if you don't have the feeling you don't have anything. On Pilgrimage: Mississippi To Memphis, these three young players not only show they've mastered the chops to play anything from Delta acoustic to funky urban blues, but they have the soul necessary to make the sound honest.

I don't think anyone needs to worry about the future of the blues; we may just need to look further afield than our own backyard to find it.