Abbeygate may have just enough sly punkitude to popularize this anachronistic sound.

Music isn't like fashion. In fashion, a few tastemakers decide "bell bottoms are back," and voila, bell bottoms are back. Tastes and styles in music change too, but the dynamics are far more complex – chaotic, one might say, like the weather. No one expected O Brother Where Art Thou to spur a popular revival of American folk music, for example. The producers accidentally tapped into the American public's dormant need for authenticity – and sold millions of CDs. A few years earlier, Gregorian Chant was all the rage. No one had plotted and schemed to sell a naveful of Chant CDs – it just happened.

Rootsy, authentic-style country music is currently enjoying a revival. National television broadcasts the Americana Music Awards; the new Roots Music Association just signed up its 1,000th member without having done anything yet; and front-porch country music scenes are thriving in places as unlikely as Brooklyn (yes, as in "No sleep till"). And while there are savvy promoters behind some of the milieu's big-name artists, they're not creating a market so much as capitalizing on one that had been underserved.

Enter British-born songstress Karling Abbeygate and California indie label Dionysus Records. Raised, so the story goes, on a diet of Jim Reeves, Patsy Cline, Tammy Wynette, and Loretta Lynn by a British mother and a Kansan father in Norwich, England, the singer has returned to those roots, changing from an ersatz alt-rock Gwen Stefani into a one-woman 1950s and 60s country music revival. With a vocal style inspired by Cline, a timbre like a higher-voiced Wanda Jackson, and a persona (on record at least) 50% Loretta Lynn, 40% Betty Boop and 10% Emily the Strange, Abbeygate may have just enough sly punkitude to popularize this anachronistic sound, which extends to the clean but deliciously old-fashioned arrangements. 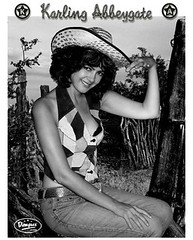 However, since trends in music can't be engineered with scientific precision, it's rather to be expected that, whether she ends up a star, a mere blip, or something in between, Abbeygate will remain a unique artist. She certainly has the talent and charm to become a big success.

The CD is comprised of a set of "lost" country songs of the 50s and 60s with titles like "It Don't Take Much To Get Me By" and "Many Happy Hangovers To You," plus a handful of Abbeygate's originals. The latter prove her to be a skilful songwriter, with a sensibility informed by but not enslaved to the old-time country tropes she sings so naturally. "Beg Steal & Borrow" sounds like something Dolly Parton might have written, with Abbeygate exaggerating her redneck accent to humorous and touching effect, and John Pinnella contributing a brilliant Dobro solo.

"Home Home Home" is a sweet, disarming new song that echoes the Everly Brothers' "Let It Be Me." "Tonight Is Gonna Last" is probably the most original original here, with a catchy and sophisticated melody that would make any crusty old Nashville songwriter proud: "I don't care if in the morning you are gone/'Cause tonight is gonna last a whole life long." Finally, the dark ballad "Someone Else's Man" shows off both her songwriting versatility and her heartbreaking juxtaposition of girlish voice with adult themes.

And in fact it's that magical voice and delivery that sells Karling Abbeygate, through originals and obscure old nuggets alike. In spite of her sometimes exaggerated stylings, you believe every word out of her mouth. (Okay, call me a sucker.) And she and her band sound so old-fashioned they sound fresh.

Maybe the very existence of this CD indicates a revival of old-time Nashville sounds (though it was recorded in Los Angeles). More likely, it's just a happy happenstance. Happy, that is, for us who get to listen. The heck with bell bottoms, anyway.