The true potential for artistic expression in contemporary music is with people like the Azam Ali's of the world.

The majority of music we listen to falls within certain set parameters that we can accept and appreciate. Folk music does this, rap music does that, and blues sounds like this. We use that understanding as a means of defining our experience depending on how well what is being listened to lives up to our expectations of how we think something is supposed to sound.

That system of appreciation works only until we leave the familiar behind and approach a creation that exists beyond the boundaries we recognize. Our frame of reference has been taken away and we have no context to place the piece musically. In some ways, I find this allows one to make a truer evaluation of the work because you are forced to listen for the intent behind the music instead of how well they have worked within a structure.

At least, that's what I tell myself (or something like it anyway, nobody really talks like that — especially to themselves) when I'm faced with something I've never heard before and is completely unfamiliar in style and type. It’s the kind of thing that I find both exciting and challenging to review because I'm flying by the seat of my pants while getting to hear music that I don't normally have the opportunity to hear and that has the potential for opening up a new world of sound.

Such was the case with Azam Ali's latest CD Elysium For The Brave. Prior to reading her press release, I had never heard of her or her music. I have already been intrigued by the music of the Middle East, or music derived from that region. I know very little about it, and specifically know very little about the music of Azam Ali's homeland Iran so was interested in hearing more. 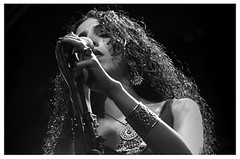 It turns out I'll have to wait a little longer to learn about music from Iran, because Azam's influences stretch far beyond the borders of her homeland. She was already living abroad before the revolution and her mother decided she didn't want to raise her daughter in that society so they remained in exile.

Her formative schooling was at an international boarding school in India and in 1985 she moved to the United States where she began her formal education in music. The first instrument that she learned, ironically enough, was from her homeland, the Persian santour – a type of hammered dulcimer. But it was her voice that would become her true instrument, and her education expanded to include Western classical, Indian, Persian, and Eastern European vocal music.

What intrigues me most about the human voice is its ability to make all things transparent through its power of transformation. The voice is not just a conduit for words. For me it is like an abstract dream in which everything makes perfect sense…I am not one who can physically remain in one place for too long…my music is going to reflect this inability to remain static, and this inability to identify myself with just one specific culture…What matters to me is that I risk, I trust, I strive, and let things unfold as they may. (Azam Ali)

In this case, the performer has provided us with a context where we can place her music. How well does she achieve her goal of letting her voice be an expression of something universal that can appeal to as many people as possible? Does the music and instrumentation utilized on the disc contribute to whatever mood she strives to create or emotion she is attempting to evoke?

Elysium is a state of grace or paradise, a word whose origins are the land of the same name in Greek mythology that is the home of the blessed dead. Before anyone jumps on the "paradise awaits the warrior who dies with the sword in his hand" shit that is fed to suicide bombers and tries to impose that on this disc, this refers to the true version of a beautiful concept that has been perverted by unscrupulous people for their own purposes.

All the dead are blessed for all the living have struggled against forces of some sort or another. Some of them win and some them lose their battles; it is based on the results of those battles that we make judgments on our fellow humans. In death those judgments no longer exist so we all have achieved that state of grace where we are free from struggle and war.

Elysium For The Brave is Azam Ali's way of honouring those who have taken risks with their lives in an attempt to rise above the circumstances life gave them. Using traditional instruments, electronics, and her vocal prowess, she creates atmospheric impressions that attempt to recreate emotional experiences that both honour that struggle and give examples of it.

One of the ironies of this type of album is the more successful tracks almost always seem to be the ones not sung in English. That rule of thumb holds true on this album as well. Although there is nothing wrong with those tracks, they lacked the emotional impact of the ones sung in Farsi or other languages. But I don't think that is completely the fault of Azam.

As a listener, I know when I hear English lyrics I will immediately begin to "think" about the song and what the lyrics are saying, instead of letting the emotional flow carry me. I wonder how a Farsi speaking person would react in the reverse circumstances, or is it just that English lends itself to rationality so readily?

While there was only one song that really stuck out in that manner, "Forty One Ways", I still found all the English songs would pull me slightly out of the atmosphere created by the other songs. That being said, the moments of absolute beauty and wonder through out disc far outshone those few distractions.

For the most part there is perfect harmony between the electronic and acoustic instruments and the mixing of traditional percussion with drum machines went a long way towards creating the unworldly atmosphere required to ensure the proper mood and feeling were created. As my own personal preferences are towards acoustic and traditional instruments, I hesitate to criticize what I feel was an over reliance on electronics but at times I felt the sound was bordering on distortion because there was so much happening at once. Again, this could just be a case of my ear not being used to this type of sound but I think the effect could have been achieved equally well if not even better with sparser arrangements.

But these are minor quibbles; Azam Ali's Elysium For The Brave is a remarkable creation in its ability to weave together an aural soundscape of power and beauty. The fact that it reflects such poignant subject matter makes it all the more remarkable an achievement. Azam Ali has managed to achieve her goal of creating a disc of music that has the potential for universal understanding and appreciation.

If you ever wondered where the true potential for artistic expression lies in contemporary music, it is with people like the Azam Ali's of the world, not the MTV generation.