It’s a typical American success story. Young man abandoned to the harsh cruelties of the world and taken in and nurtured by compassionate chickens rises above his troubles to make his way to the top of the entertainment field.

The legend of Buckethead has already entered into the lexicon of American folk heroes based on his early collaborations with such notables as Viggo Mortensen, and his many striking live performances. Carefully keeping his secret identity obscured through the use of the corporate chicken bucket that gave him his moniker and a full face mask, our hero and his faithful retinue has traveled the land, guitar in hand, freaking the fuck out of most who see him.

Hitting mainstream America where it hurts the most, their obsession with indigestible chunks of deep fried poultry parts, Buckethead is the body slam to end all body slams. His latest release, Enter The Chicken is a continuation of his aural assault on the senses of all things white bread with their crusts removed.

The eleven tracks recorded under the stern tutelage of Serj Tankian of System of a Down sees Buckethead joined by members of the ever expanding band of cohorts, fellow travelers, and fifth columnists he refers to as “friends”. The music is as diverse as those who have joined our hero in his quest for meaning and peace in an otherwise troubled life.

From the screaming thrash of “Funbus” with rockers Bad Acid Trip, and “Botnus” with Efrem Schultz, to the ethereal vocals of Azam Ali on “Coma”, Enter The Chicken shows off the virtuosity of our hero. He is just as comfortable with the delicate touch as he is with a wall of sonic fuzz that could work as a missile defence system. 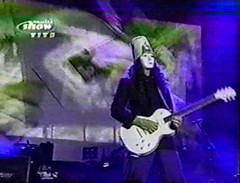 Already the work from this CD has allowed Buckethead to stretch his wings beyond the cooped up confines of music to the expanse of movies. The song “Three Fingers” with Saul Williams now appears on the soundtrack of the movie Saw II. With Buckethead Land already a reality perhaps movies are the next inevitable step in the progression of growth for this artist.

Some simple truths for a moment; Buckethead creates aural landscapes across which foregrounds of disquiet can be played out. He doesn’t cater to the expectations of the mainstream, but he’s not shock for the sake of shock either. At the risk of sounding far more artsy than might be appreciated or appropriate his music is an expression of the real anger that exists in North America these days.

Hidden behind the veneer of pop culture and the sophisticated games of the new technology is genuine discontent and a world that has more of the outside looking in to it than the mainstream would like to believe. In this brave new world order of global expansion and Donald Trump worship there are the far more lives of quiet desperation being lived out than anyone would like us to believe.

His earlier collaborations with Viggo Mortensen are testimony to his larger view of the world than a simple listening of this CD may imply. Taken out of context of his earlier work one only sees and hears the workings of a guitar player who delights in the sounds and the power of his instrument.

Like the painter who fills his canvass with images of blood and destruction to express his revulsion of the callousness of society, Buckethead’s sonic assaults combined with his geek, outsider image can be seen as holding up a mirror to society’s treatment of those who don’t fit or fall through the cracks. Anger and grief are two sides of the same coin and periodically one or the other will gain dominance.

On Enter The Chicken Buckethead takes the step into the camp of the rebellious uprising against normalcy. Normal is not something that appears to be conducive to the health of most individuals these days. How else can you explain the extraordinarily high number of people being treated for stress disorders?

On one hand this can be disc can be listened to as a brilliant foray into hard and thrash rock with some moments of reprise. On the other, when taken in tandem with Buckethead’s persona and the myth of Bucketheadland one begins to understand the subtlety of the satire that is at work here.

Enter The Chicken is just one piece of the puzzle that is Buckethead. Enjoy the music, but don’t come to any conclusions because of it, they’re liable to be wrong.

Editor’s note: This work of yours now has another venue for success – and more eyes – at the Advance.net Web sites, a site affiliated with about 12 newspapers.

One such site is here.