MTV's 'Till Death Do Us Part stars last 2.5 years.

For former Baywatch hottie Carmen Electra, 34, now busy evolving into a reasonably competent actress, and her husband of less than three years, former Jane’s Addiction and Red Hot Chili Peppers guitarist Dave Navarro, 39, the dream of a lifetime of wedded bliss has ended.

In true modern celeb love fashion, the couple publicly documented their November 2003 wedding (her second, his third) on MTV’s ‘Til Death Do Us Part: Carmen & Dave. 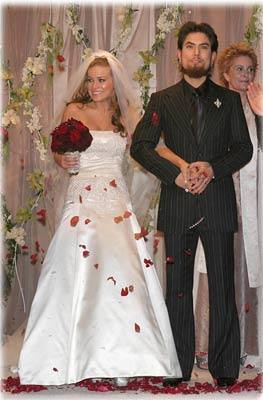 I remember their “story-book romance for the ages” as if it were yesterday. The toothsome twosome met on a blind date, and “it was love at first sight,” Electra cooed. The platinum-and-red invitations called for “hot and sexy” attire. The 200 guests who arrived at the St. Regis Hotel in Los Angeles were greeted by men dressed in black with red masks covering their faces, as in Eyes Wide Shut, one of the couple’s favorite films.

But the feelings they expressed for each other couldn’t have been more traditional, although one of the flock of parrots gathered for the ceremony squawked at an inopportune moment.

“I’m nervous!” Navarro declared said before the nuptials. “I’m marrying the girl of my dreams.” The actress and aerobic striptease instructor, who was married briefly to Dennis Rodman in 1998, wore a strapless, beaded, cream-colored Badgley Mischka gown. Navarro wore a Gucci suit. 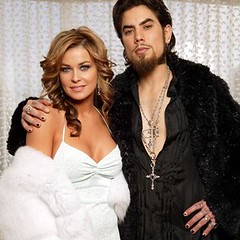 A few months later, a giddy Navarro joked with MTV News. “Thanks to MTV, we can give our kids a DVD package about how their parents met and wed. And maybe MTV can document our childbirth. I got some making-of home footage.”

The couple spent a lot of time apart: she making movies like Scary Movie 4 Date Movie, and — believe it or not — Cheaper By the Dozen 2, while Navarro is cohost of CBS’ Rock Star: Supernova, helping Tommy Lee find a singer for his new metal band. The guitarist’s current band, the Panic Channel — with singer-guitarist Steve Isaacs and Jane’s Addiction mates Stephen Perkins and Chris Chaney — releases its debut album, ONe, on Aug. 15. 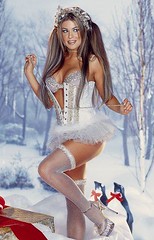 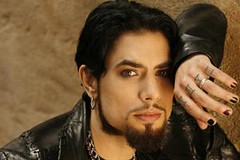 In April, Electra told People magazine, “We’re fine! I’m not saying we have the perfect marriage or that we’re the perfect couple, but we’re pretty damn good. If there were trouble, I wouldn’t have my ring on. I would not walk around and pretend.”

And now she’s not.