The Indian author confirms himself to be one the best storytellers of our time in this adaptation of the Ramayana.

Book Review: The Bridge Of Rama by Ashok K. Banker

Once in a while, an author manages to captivate you so completely that you are drawn into the world they’ve created without even noticing. You open the pages of the book, and the next thing you know you’re on page 100, two hours have passed, and you’ve no recollection of when you started reading.

What’s truly amazing is that you don’t even feel like you’ve been reading. It feels like there is an external voice whispering the story in your ear and the only effort required on your part is to listen. There’s no fighting to understand what the author means, or feeling of being spoon-fed information in order to lead you to some inevitable outcome. It’s like having your own personal storyteller sitting on your shoulder.

This is the case with the work of Indian author Ashok Banker. The first four books of his adaptation of the Ramayana have all been like that, and book five, Bridge of Rama is no exception. 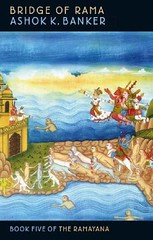 Bridge Of Rama picks up the story where we left off; Rama’s wife Sita has been kidnapped by the King of the Ausras (bestial demon-type creatures) Ravana, and taken back to his island home of Lanka. Rama and his allies, the vanar, an ape-like people, are massing on the shores of the mainland hoping to find a way across the final hurdle of the ocean so they can rescue Sita.

Even when the devoted Hanuman, the vanar to first recognise Rama’s inherit greatness, returns at the head of an army of countless number of his own kind, plus an additional army of rksa (bears) the seemingly insurmountable problem of crossing the ocean is before them. After dismissing the idea of building boats to transport them as impractical, they settle on building a bridge.

At first, this too seems an impossible task, until one of the vanar strikes upon a plan that utilizes their major strengths, their willingness, and their numbers. All of a sudden, their goal appears within reach. That is until Rama is visited by the shade of his father, who informs him that if he is not able to rescue his darling within 24 hours it will be too late.

Aside from beings of great strength and courage, the bears also turn out to be repositories of all knowledge. They remember their incarnations, and thus all the events of not only this lifetime, but lifetimes dating back generations. They are therefore able to reveal a secret that the Gods have long kept hidden from Hanuman: that he is actually the illegitimate son of Marut, the god of Wind.

Once Hanuman is able to assimilate who he is, he utilizes his powers in an attempt to rescue Sita from the clutches of Ravana by leaping across the ocean to land on the island. Here he finds a surprise awaits him.

Instead of the island of Lanka being the picture of horror that he anticipated, it is fact a city of beauty and splendour. What devious plan is Ravana hiding beneath this veneer of gentility?

Sita knows, as she has been here to witness his subtlety in action. From the onset of her captivity, she is astounded to find that she is being treated with relative kindness and respect. Ravana seems to be at pains to present as opposite a picture of his true nature as possible. For a guy whose name means “he who makes the universe scream” he’s being awfully polite and considerate.

But as events unfold, and her stay continues, Sita realizes what Ravana is up to. He is attempting to cast himself in the role of Rama, the virtuous adherent to dharma, and to paint Rama as the conductor of genocide and perpetrator of evil. As all good spin-doctors will, he uses actual events, and twists them to his advantage as evidence of Rama’s nefarious attitudes.

If he can, he will besmirch the name of Rama and those who come after will see Ravana in the role of defender of his people and their way of life, while Rama is the one intent on destruction. So it is, that when Hanuman show’s up to rescue Sita, although she desperately wants to leave with him, she knows she cannot. Rama must come to Lanka and expose Ravana to the world for what he is, and the only way he will do that is if Sita is still held captive. She is willing to sacrifice her own life to ensure that the necessary confrontation between the two beings occurs so that history will know Rama was a hero.

Reluctantly Hanuman acquiesces to her demands and changes his course of action from that of rescuer to that of emissary. Using his immense powers to defeat all challengers, he proceeds to rampage through the city demanding to be taken to Ravana. Finally, he allows himself to be captured and beaten by Ravana’s eldest son so that his wish can be fulfilled.

Once again, Hanuman uses his powers to his best advantage and escapes the trap that Ravana sets for him, and manages to affect his return to Rama. Along with the message from Sita about the plans of Ravana, he brings with him a warning of how truly powerful Ravana and his armies still are, and they must be prepared for a fierce and protracted battle when they manage to obtain the island.

As you can tell by the length of that summary, this is a story that is jammed-packed with action. But events are merely a means of expressing themes and travels take place on more than just the physical plane in Ashok Banker’s Ramayana. This is a story of faith, faith in one’s self and where we find it, and faith in the veracity of our chosen path.

Doubts plague us all weakening our resolve and literally bring us to a standstill. Doubt in your abilities to accomplish something and you will never accomplish it. Doubt in what you believe in and you will continually second guess all your actions and be rendered immobile.

Blind faith, faith, which has no justification or basis to rest on ends up being hollow and unable to sustain itself. Those who follow Ravana have given themselves over to him body and spirit and have little or nothing left for the nurturing of self. Without that, they are unable to grow beyond their bestial appetites and are continually at the mercy of their baser selves.

As Ravana desires complete control over his followers, this works to his advantage as it allows him to dominate through fear and intimidation. But this form of rule is not fertile ground for loyalty or individuality, and contributes to the stagnation of the inhabitants of Lanka. Ravana sees his subjects as objects at his disposal, to make use of as his needs dictate, and thus cares not a whit for their aspirations and desires. Unless of course they happen to coincide with his own, or if, he can contrive to utilize them to achieve his own ends.

In the character of Hanuman Mr. Banker shows over the course of two books the process that is necessary for the development and utilization of faith. In Armies Of Hanuman the young vanar learns to recognise and appreciate the values that are expressed by Prince Rama.

As Rama expresses faith in his abilities, Hanuman begins to not only have faith in himself, but when the time comes is ready to accept his godly aspect with humility and awe. His only desire is to utilize these powers in repayment for the faith shown in him. Rama leads by example, never threatening and always grateful. By reciprocating the faith of his followers, he elevates their sense of self worth, which precipitates growth and loyalty. Hanuman’s devotion to Rama and his faith in the precepts he adheres to provide him with the strength to overcome all of his inner demons and insecurities.

What makes Bridge Of Rama work as both an entertaining story, which it is, and an exploration of faith and other ideals, is Banker’s ability to integrate plot and thought seamlessly. Even at the books most philosophical moments, you only ever hear the voice of the character, never the author. His characters are so well created and thought-out that every word out of their mouths is believable and fits into who they are. Rama, Sita, Ravana, and Hanuman are just the tip of the iceberg for this attention to detail. No matter how minor a role the character could have in the story, each has their own distinct voice, and stands out from the rest of the crowd.

Mr. Banker’s eye for detail, and his descriptive turn of phrase allows the reader to feel like they are seeing their surroundings through the eyes of the person who’s there. Sita’s exploration of the tower floor that she is being held captive on, and her gradual realization that what she thought was a forest grove is actually something else, is a fine example. Little clues are offered up to make her suspicious, but what finally tips it over the edge is the fact that the moonlight covers every surface of everything. Instead of just illuminating the tops of leaves, their undersides are just as bright. As we haven’t really understood where she is being held up until that point, the realization that she is in some sort of magical prison strikes us both as the same time.

With Bridge Of Rama Ashok Banker confirms himself to be one the best storytellers of our time. Not only does he create memorable characters, but has the ability to describe their circumstances and situations in a manner so vivid that you can almost feel the breeze he describes blowing on your face.

Within the context of the series Bridge Of Rama is somewhat akin to the drawing in of breath before the last battle. The forces are gathering in one place for their final confrontation and the leaders are marshalling their thoughts. With Sita remaining Ravana’s captive, there is now no other choice for Rama but to invade and attempt to rescue his wife.

What will happen when Rama and Ravana finally confront each other? How much of themselves will they each see in the other? In my minds eye I can see the countless bears and vanar beginning to line the bridge from the main land to Lanka making their way across the treacherous ocean. I can’t wait to join them for the last chapter of the Ramayana.