Everything the novice needs to know about the craft of acting.

Book Review: The Actor as Storyteller: An Introduction to Acting by Bruce Miller

Jack Goodstein February 28, 2012 Comments Off on Book Review: The Actor as Storyteller: An Introduction to Acting by Bruce Miller 189 Views

Bruce Miller’s The Actor as Storyteller: An Introduction to Acting now in its second edition is a textbook for the aspiring young actor which aims at providing students with a basic understanding of the tools and training required for a career in acting. It begins with the assumption that many students come with a lot of desire but limited knowledge, so it makes sure to start with the basics and build from there. Although it will certainly give an individual reader a valuable guide to what is involved in a typical actor training program, this is a book meant to be used in a classroom setting. 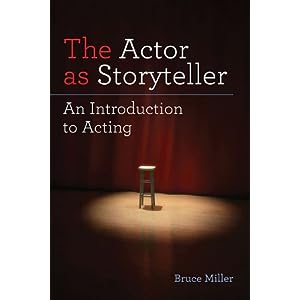 Miller, who has worked as a professional actor, now directs the acting programs at the University of Miami, and has written a number of other books on the craft of acting as well as articles in Dramatics Magazine and Teaching Theatre. He comes with both a practical and an academic background, and his book is careful to consider theories in the light of real world experience. He is not pushing any one specific system; he is interesting in craft and technique that will give the student the best chance of developing whatever talent he may have.

Significantly, he doesn’t offer the prospective student pie in the sky visions of fame and fortune. He makes clear that acting is a tough profession with a limited success rate, that talent isn’t always enough to make a career — there are no guaranties. He stresses the work involved, making clear that there is more to it than red carpets and adoring fans. Too often texts in the creative arts encourage unrealistic expectations. Their authors are little more than salesmen for their disciplines; thankfully, Miller never falls into that trap.

Beginning with the fundamental thesis that the actor’s job is to serve the play, he discusses how the student must learn to read a script analytically in order to understand his character’s function in the whole and how best to realize that function for an audience. Most all of what he has to say is the common fodder of the typical acting manual. Look at a scene and define your objective. Play actions rather than emotions. Focus on conflict. These are not necessarily innovative ideas, but in a text for beginning actors, innovative ideas may be counterproductive. You need the basics, before you begin experimenting. He does talk about people like Stanislavsky and Strasberg, but don’t look for Grotowski or Anne Bogart.

Stressing the significant differences between film acting and acting for the theatre,  Miller makes the case that studying for the theatre provides the better foundation for the actor. Film actors, he argues, have often failed on stage, but actors trained for the stage have done very well in film. Now while there may be something self serving in his argument, he provides enough examples to suggest it is not all that unreasonable.

Perhaps the most useful parts of The Actor as Storyteller are the numerous exercises he includes in each chapter. Whether it’s examining different ways to say “I love you” or outlining the beats in Robert Browning’s “My Last Duchess,” the book is filled with opportunities for the student to practice the various techniques on his own and with partners in front of the class. There are lists of plays and playwrights the student would do well to be familiar with, and there is a helpful list of books on a variety of subjects related to acting and the theatre in general.

Miller offers advice on everything from auditioning to developing a tolerance for the criticism that is bound to come to all actors. In the end he talks about his own experience working professionally and his reasons for turning to academia. If, perhaps, the account might have served better as a cautionary tale earlier on in the book, it does in the end drive home the message that acting is nice work, if you can get it — with the emphasis on the “if you can get it.”