We're hiding in plain sight with this one.

Blogcritics has Another Giveaway In Plain Sight

You do of course know by now that the best place you can possibly hide is in plain sight… in Albuquerque.  I think that's because Mary McCormack plays Mary Shannon, who works for the WITSEC out of Albuquerque on In Plain Sight.  See how that works?

I don't know if you're aware of this, but the series returns to USA on Sunday April 19 at 10pm.  Or, as the publicity-types put it:

In Plain Sight season 2 premieres on Sunday, April 19 at 10pm. The show stars Mary McCormack as Mary Shannon, a U.S. Marshal working in the highly secretive branch of the witness protection program (WITSEC) who relocates Federal Witnesses – many of them who are career criminals, and many who are innocents that had the misfortune of witnessing a crime.  They all have one thing in common – someone wants them dead.  Mary's job is to see that doesn't happen, while at the same time attempting to manage her own dysfunctional family.  In Plain Sight also stars Frederick Weller, Lesley Ann Warren, Nichole Hiltz, Paul Ben-Victor, Cristian de la Fuente and Todd Williams. Find In Plain Sight on the web: Facebook Fan Page and Twitter.

See, didn't they say that nicely?  They also said this:  "Want another chance to win? Enter every day the In Plain Sight  "Operation Relocation Sweepstakes" for your chance to win a $500 American Airlines Gift Card or a 5-piece Tumi Luggage Set, court 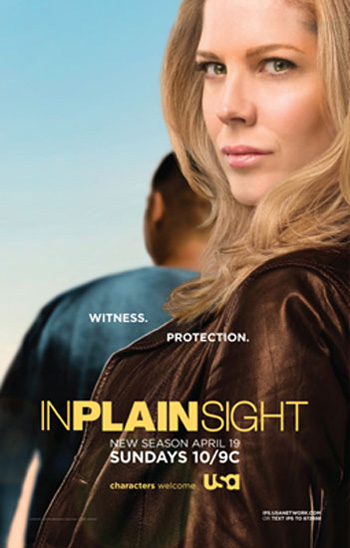 esy of USA NETWORK! Enter at the official site."

Here's what we have for four winners:  $100 American Airlines Gift Card, In Plain Sight Season One DVD, Nylon Travel Bag, Tank Top, Luggage Tag.  I mentioned we have five winners though, so, for our fifth winner, or, if you prefer, our "grand prize winner" we're giving away all of that stuff mentioned above plus an autographed photo of Mary McCormack and an In Plain Sight poster (not necessarily the one pictured here).

As for our rules (these, plus the ones on the entry form):