We watched the Athens Olympics every night for over two weeks, and It Was Good. I viewed the Games at a strange remove having been there in person for the previous five, and while TV can give a scope and comprehensiveness not possible in person (unless you have a jet-pack) squeezing the enire experience through the lens of a camera (well, dozens of cameras) can’t help but reduce its immediacy and dull the visceral impact of sharing physical space with competitors, spectators, fans, judges, volunteers, and the Olympic infrastructure, pomp and ceremony.

I appreciated the amazing width and breadth of NBC’s multi-channel coverage, giving most every sport at least some face time, and while the prime time coverage on NBC was predictably focused on the big-draw events of swimming, diving, track and field, and was heavily American-centric, at least they did it well and there was always alternative programming on the other networks. And, prime time at least touched upon all the major stories even if they … gasp … involved athletes from foreign lands or sports off the beaten path. Richard Sandomir of the NY Times offers similar thoughts on the TV coverage here.

I don’t regret having a new perspective on the Games (not that I had any choice this time) from having seen them on television-only for the first time in 20 years, but I also know what I missed, which was in the most important sense, everything. 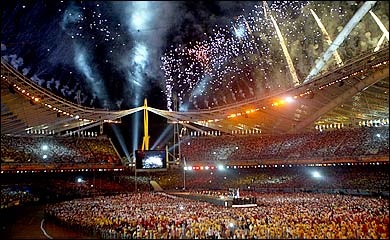 I particularly felt the pangs of distance at the opening and closing ceremonies, both of which were spectacular, mythic, and wildly festive. AP’s Christy Lemire focuses on the pop music party at the end of the Closing:

Anna Vissi — Greece’s own Madonna — sang her famous song “Eisai” (“You Are”), and its disco rhythms had volunteers and even a few journalists dancing in the aisles.

Alkistis Protopsalti got the crowd swaying and singing along to the title song from the 1960 film “Never on Sunday,” by Greek composer Manos Hadjikdais.

But the loudest cheers and applause were for up-and-coming pop star Sakis Rouvis, who descended from the sky on cables in an all-white jumpsuit that made him look like Elvis — the young, thin one.

Rouvis, who’s wildly popular from his performance in a Mediterranean version of “American Idol,” told The Associated Press the previous night that he wasn’t nervous about performing in front the entire world.

The flame went out on the Olympics during a closing ceremony Sunday night that honored the birthplace of the games with an ebullient display of Greek pride and symbolism, a relief-filled celebration of the ancient and the new.

Famed Greek singer George Dalaras serenaded the crowd. Dancers danced, arms folded, legs kicking high, during an enactment of a traditional Greek wedding. Fireworks exploded over the stadium packed full with 70,000 fans who waved twinkling strobes they were given to light up the show.

Hundreds of athletes from many of the 202 countries that participated mingled in the center of the stadium and paraded their flags — Canadian and Swiss, American and Brazilian — around the floor. They were ringed by a cadre of security guards, and a white security blimp hovered overhead, just two of the strong reminders of how much the world has changed since the Sydney Games four years ago.

Later, the huge white torch that burned brightly over the stadium for 17 days was lowered and symbolic remnants of the flame were passed to the people of Beijing, where the games will be held in 2008.

China’s capital city put on a short ceremony filled with a preview of what’s to come. Chinese string instruments played and red-clad martial arts performers romped around the stage. Elaborately clad women wearing headdresses walked out on stilts. A giant, red lantern popped up and, while a young Chinese girl sang, a banner was unfurled that said “Welcome to Beijing.”

….”The world discovered a new Greece,” said Athens 2004 president Gianna Angelopoulos-Daskalaki, who made it all happen with her fierce determination to overcome construction delays and avoid international humiliation.

….Mia Hamm was the U.S. flagbearer during this, the last of three medal-winning appearances for her at the Olympics. The U.S. women’s soccer team won one of the 103 medals for the Americans, surpassing the U.S. Olympic Committee’s goal of 100 and easily outdistancing Russia, which finished second with 92 medals.

China was third with 63, and the Chinese already are gearing up their Olympic efforts, planning to lead the world when the games are at home.

In his closing remarks, International Olympic Committee president Jacques Rogge lauded Athens, a city that came close to having the games taken away because of massive construction delays.

“You have won,” Rogge said. “You have won by brilliantly meeting the tough challenge of holding the games. These were unforgettable, dream games.” [AP]

Athens deserves nothing but the highest praise for a Games that can only be described as a fabulous success.

“These were the most successful Games ever,” she said, going further than IOC chief Jacques Rogge, who described them in his closing ceremony speech as an “unforgettable dream.”

“Not just Zeus, but all the Gods smiled on what we have done,” Angelopoulos said.

She said the Games marked the emergence of a new Greece and were worth every cent of the billions of dollars that were spent to stage the homecoming of the Olympics to both their ancient and modern birthplace.

Some economists estimate the cost of the Games have more than doubled from the original 1997 budget of $4.6 billion, setting the scene for a likely political battle in the weeks ahead.

But Angelopoulos, who even critics agree carried the Athens Olympics across the finishing line almost single-handed after several years of political infighting, said the Games were the spur for infrastructure work that was long overdue to make Athens a modern European capital.

Much of the money went into upgrading transport and other projects that have finally untied the knot of old roads that made the city one of the world’s most congested.

“There is also the human legacy of the skills that our people have learned which can never be calculated,” she said.

Angelopoulos said Athens had also won a battle against fear by hosting the first summer Games since the September 11, 2001 attacks on the United States with a “flawless” security operation.

She is exactly right: the infrastructure work needed to be done anyway and the Games simply gave the work a focus and a deadline, the positive exposure for the city and the country is priceless, as are the skills and experience gained. The Games were an investment of the highest order that will pay off for decades to come (of course they’ll be paying for it for that long as well).

Heartiest congratulations to the Greeks, who profoundly displayed the glories of the “greek soul.” It will be interesting to see what the Chinese come up with – I intend to be there.