The reaction of Asia House, the media, the artistic community, and of London itself, has been wholly inadequate.

Art Exhibition in London Closed After Attack by Religious Extremists

An art exhibition in London has been cancelled after an attack by Hindu extremists on two of the paintings. The excuse: “security reasons.” How incredibly wimpish is that? Particularly when…

Maqbool Fida Hussain, 90, who has stirred controversy in India among militant Hindus by painting Durga, Saraswati, and other Hindu deities in the nude, came to London for the summer to seek a more tolerant artistic climate.

That was after he faced charges in India for hurting the sentiments of people. (A very curious charge. Lots of things offend my “sentiments” every day — people driving planet-destroying 4WDs in London, for example, but I don’t expect them to be charged because of my feelings.) 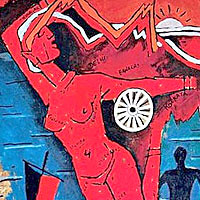 The artist, most usually known as M.F. Hussain, or just “Hussain,” so well-known is he in India, has had a score of solo exhibitions around the world, going back to 1950. He was described by Forbes magazine as “the Picasso of India.. This is no young artist setting out to make a splash with controversy. (Not that it should matter if he were.)

After the attack, with black spray paint, Asia House’s insurers have said they would not cover the exhibition. (Which surely they should not be allowed to do. They are insurers — it might be reasonable to demand more security precautions or guards, but such actions only invite more similar actions. Have they not thought of that?)

I’ve linked above to the Telegraph story (short), and there was a comment piece in the Observer yesterday. That’s it. (At least all that appears on Google News.) A blog piece by Sujit Nair, a PhD student in America, sets out some of the issues and refutes the arguments of those who would deny Hussain free speech.

A major exhibition, by an important international artist, has been forced to close by probably a handful of people. And hardly anyone seems to have noticed. This simply isn’t good enough, from the media, from Asia House, from the artistic community, from London itself.

All references to the exhibition appear to have been removed from the Asia House website but the email address is there. If you care about artistic freedom, about freedom of speech, I’d suggest dropping them a line.

(The image, of a painting called “Mother India”, is from MFHussain’s website, which, when I found it, showed signs of being attacked by hackers but was still more or less functional. I don’t know if it will stay that way.)

So how did I get here? I mean wind up as a Jewish Cantor? A …