Michael Westen has a problem, he's been burned.  He was a spy (and, frankly, a good guy), but someone, somehow (he reminds us every episode) put out a "burn notice" on him.  Pretty much that means that he's out of the official, government-organize, spy game.  So, instead, he's opted to go freelancing and to try to figure out who burned him and why.  Quite honestly, he's had some luck, and, he'd have me tell you, you can watch him every Thursday night on USA in Burn Notice (see, he had the burn notice put out on him and so his show is called Burn Notice)

Now, in Michael's line of work, he needs lights of cool toys, some might refer to them as something of a "Tech Pack."  Imagine it, a tech pack which includes a mesh case, a Casio watch, a Mag flashlight, and some binoculars.  Common spy-type stuff, right?  Well, we're going to give you an opportunity to win such a "tech pack" plus some other cool beans stuff.  But, first, a message from the show's publicity folks:

Burn Notice, the hottest show last summer returns for its second season continuation with seven all new episodes on Thursday, January 22, 2009 at 10/9c. Burn Notice  is a sexy action-packed series starring Jeffrey Donovan (Changeling) as Michael Westen, a blacklisted spy who finds himself stranded in sun-soaked Miami without money, resources, or a clue as to who burned him, or why. The only tools at his disposal are his wits, his charm, his special ops training and his "friends:" Fiona (Gabrielle Anwar – The Tudors), a beautiful ex-IRA operative who also happens to be Michael's ex-girlfriend, and Sam (Bruce Campbell – Evil Dead), a washed-up military intelligence contact who works as Michael's sidekick, and his mother (Emmy Award-winner Sharon Gless – Queer as Folk), who Michael has spent most of his adult life trying to avoid. Visit the official site or join other fans on Facebook.

I didn't mention it has Bruce Campbell, Gabrielle Anwar, or Sharon Gless, did I?  Well, it does, and they're all fun to watch.  So, anyway, this prize I was telling you 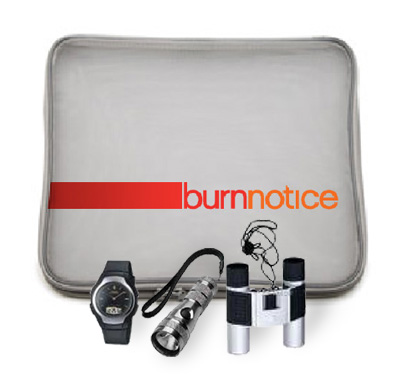 And as for the rules (there are always rules in these situations), they are as follows (these plus the ones on the entry page):

Plus, just for fun, check out a promo for the show: