On Monday, December 11, A&E will premiere Wedding Wars, a two-hour original movie staring John Stamos, Eric Dane, and James Brolin. What sets this romantic comedy apart from the usual fare is the focus on same-sex marriage.

Love and family get confused with politics and marriage rights when Shel, a gay wedding planner (Stamos), agrees to lend his services to his brother Ben (Dane) and Maggie (Bonnie Sommerville), who is the daughter of the Governor (Brolin). After the Governor comes out against gay marriage, in a speech written by Ben, Shel goes on strike. His actions ultimately fuel a nation-wide protest by gays for the right to marry. Sean Maher and Rosemary Dunsmore also co-star. 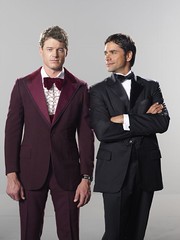 While focusing on the politically charged topic, at its heart Wedding Wars is a romantic comedy exploring the relationships of Ben and Maggie and Shel and his partner, Ted, as well as the relationship of the two brothers.

John Stamos has been heating up the small screen on ER this season, playing Tony Gates, a gulf-war veteran and paramedic turned intern. Before that, he appeared in Jake in Progress and Full House. He also has numerous producing credits including Jake in Progress, the ABC miniseries Beach Boys: An American Family, which received an Emmy nomination, and the made for TV movie Martin & Lewis.

When not acting or producing for television, Stamos has appeared on Broadway in Nine, Cabaret, and How to Succeed in Business Without Really Trying. He has also served as an occasional drummer with the Beach Boys for more than 20 years.

Eric Dane, Grey's Anatomy's Dr. McSteamy, previously appeared in the television show Charmed as well as the made for TV movies Serving In Silence and Helter Skelter. He's also appeared on the big screen in The Basket, Open Water 2, and X-Men: The Last Stand. 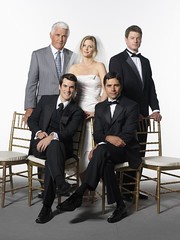 James Brolin, probably one of television's most recognizable stars, is best known for his roles on Marcus Welby MD and Hotel. Other notable appearances include television's Angel Falls, And The Sea Will Tell, and The Reagans, a role for which he won an Emmy and a Golden Globe. His more notable silver-screen appearances include Traffic, The Master of Disguise, and Catch Me If You Can.

Wedding Wars is directed by Jim Fall, written by Stephen Mazur, and produced by Storyline Entertainment in association with Sony Pictures Television. A video clip about the movie can be found on a webpage at the A&E website. It premieres on A&E on December 11 at 9 p.m..