Giving the viewers an inside look at Simmons' private life.

On Monday, August 7, the A&E network will launch their newest reality show, Gene Simmons Family Jewels, a real-life family series about a legendary rock star and his unconventional life. The series will launch with back-to-back episodes at 10 and 10:30 pm Eastern.

The show will follow the rock star who is known as the tongue-wagging member of Kiss and the mother of his children, Shannon Tweed, a former playmate of the year, in their day-to-day life. Though the couple has never been married, they have been together for twenty-two years and are happily raising their surprisingly normal children, Nick and Sophie, who are seventeen and fourteen.

While comparisons are bound to be drawn to MTV's The Osborns, viewers may be surprised to see the renowned ladies' man doing the average dad tasks of taking the Gatorade to Sophie's soccer games and being a front-row supporter when Nick's band has a show. 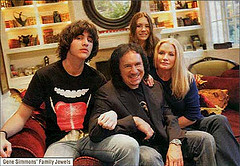 Another little-seen part of Simmons is his business side. Aside from the merchandising involved with Kiss, he runs a record label, Simmons Records; Simmons Audio-Visual; and Gene Simmons Game magazine. One might find the above images conflicting with those often showing Simmons with women who are not Tweed on his arm and the rock-n-roll lifestyle associated with numerous years on the road. 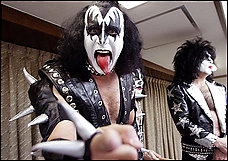 According to the Beacon Journal Tweed said at a press conference, "I am not a stupid girl, nor am I a doormat…He has never lied to me, and I don't think he cheats.'' She then went on to distinguish between emotional cheating and sexual cheating, naming the latter as a forgivable offense.

Simmons is a founding member of the band Kiss. According to their website the band is one of America’s top gold record champions. They have recorded 36 albums and sold 75 million albums worldwide in their 32-year career.

A&E promises the show will dig deep into the private family side Gene has spent many years sheltering from public view and describes the Simmons-Tweed family thusly: "Funny, loving, often at odds, this is a real life extraordinary family — but one that we can all identify with."

Gene Simmons' Family Jewles is produced for A&E Network by The Greif Company/A Day With, Inc and the Gene Simmons Company.