A sneak peek and listen at Paul McCartney's new album, released June 5, 2007 in the U.S.

This Tuesday, June 5, 2007, Paul McCartney's newest album, Memory Almost Full will be released and BC Magazine is proud to be able to give you a sneak peek at this highly anticipated first release from Starbucks Hear Music label.

The album is also a follow-up to McCartney’s critically praised and Grammy nominated Chaos and Creation in the Backyard. Though the album received many accolades, McCartney felt Capitol did not promote it as well as they could have and left the label. In a recent press release concerning Memory Almost Full McCartney confides he actually stalled work on this album to record Chaos. “The first recording session was back in the autumn of 2003 at Abbey Road with my touring band and producer David Kahne. I was right in the middle of it when I began talking with Nigel Godrich about a brand new project (which became Chaos And Creation In The Backyard). After the Grammy nomination when everything concerning Chaos was finished I returned to making this album. I was wondering if I would enjoy it, but actually I really loved it.” 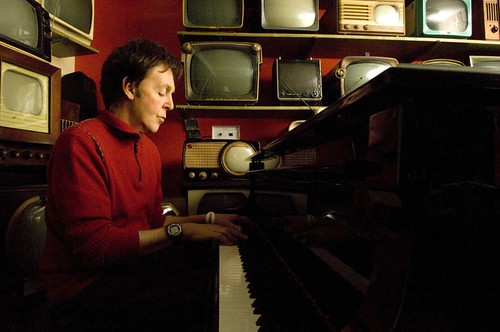 The album is thirteen tracks, and the full album can be heard in streaming format. Continue reading to see notes on each track from Paul McCartney, taken from a recent press release, and also hear audio streams and watch video streams from Memory Almost Full.

"Dance Tonight"
The song is the first single from Memory Almost Full and will be released to radio June 18, but you don't have to wait until then to hear this upbeat number sure to remind you of past great McCartney songs. An audio stream of “Dance Tonight” is available.

The song has a very light and cheerful feel, and features a mandolin, an instrument McCartney says he discovered in one of his favorite guitar shops, and enjoyed fiddling around with and learning to play. "I fell in love with this song and with the mandolin. The song kind of wrote itself. I thought I’m just gonna keep it simple," McCartney says. Below is the video, hosted on Youtube.

“Ever Present Past”
Of this song, McCartney says, "Sometimes I just sit down and try and write a pop song. I’ve done it throughout my life and it’s an interesting thing to do, to make something kind of catchy that might be attractive." And a catchy little pop tune it is. Against a contagious melody are lyrics that speak of how lives move in a circular motion, ever mindful of and affected by their personal past. Listen to the audio stream.

“See Your Sunshine”
The song exudes warmth — yes, sunshine — in the melody, instrumentation, and tempo. Its tone is fun and carefree and completely fitting of the light happy lyrics. "I was going where I wouldn’t normally go, throwing in notes, but somehow it fit. I think I only did two takes, it’s mad like that, but those were the ones that we used," said McCartney. Listen to the audio stream. 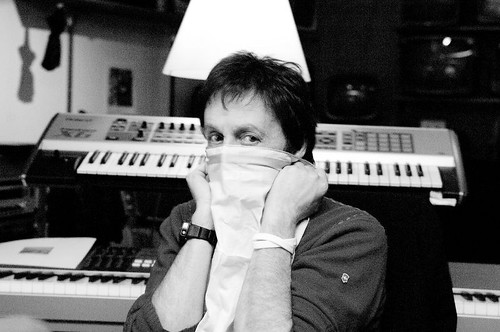 “Only Mama Knows”
“Only Mama Knows” really is like a short story. I’ve done that in the past, not always writing from a personal perspective. So it’s kind of nice because you get more into your imagination and that’s something I enjoy," McCartney says about this song. The lyrical story format is not the only similarity to his classic "Eleanore Rigby. It has that same eerie and mystical feeling to it – and a definite seventies rock feel. Listen to the audio stream.

“You Tell Me”
McCartney reflects saying the song is about memories of summer's past. "I started off just remembering summers. ‘Were we really there?’ ‘Was it real?’ Sometimes for a lot of people your memories, particularly childhood memories, seem so golden and you think ‘did it really never rain all summer or am I just imagining the sunny bits?" But, at least for this listener, you have to dig deep to feel anything warm and happy. The melody and tempo lends itself to the reminiscing, but McCartney's voice is almost mournful. When you do peel the layers back and listen to it a few times, it all comes together. What he captures with this track is the light fog we look back at the past through, similar to what is left behind by the cool rain on a window in the summer. Listen to the audio stream.

“Mr. Bellamy”
Another song that is a layered story wrapped around an interesting character. "Mr. Bellamy" is also one of those songs that seems to harken back to the seventies classic rock style. I wouldn't say it's retro, or set it the past as much as it pays tribute to the roots of this songwriter and musician. It's a fun little track. "Who is Mr Bellamy? I never know who these people are. ‘Who are Chuck’n’Dave from “When I’m 64?” ‘Who is Eleanor Rigby?’ ‘Who’s Desmond and Molly from “O?” I don’t know. I make them up," McCartney explains. Listen to the audio stream. 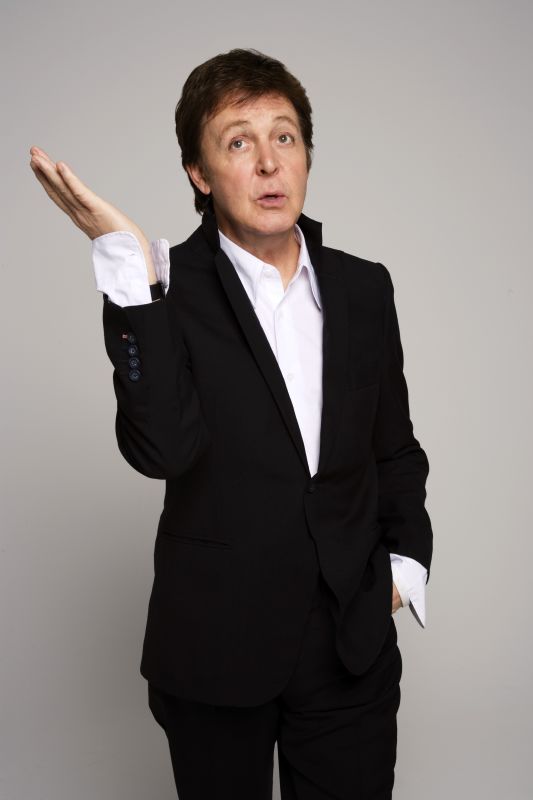 “Gratitude”
"So on this track I was just thinking of how much there is to be grateful for in life and I wanted to put that into song and use this voice to do it with," says McCartney. The voice he's referring to is what he calls his ballad voice, but the song isn't what I would call a typical ballad. It's has a funky style – one I'm not sure anyone else could pull of so effectively. Listen to the audio stream.

“Vintage Clothes”
Life is circular. If you don't believe that just look at the fashion industry. Not that long ago I would have never believed bell bottom jeans would get a second chance at being chic. But what the song seems to say is don't hold on to those clothes in hopes they will get a second shot at glory. In other words, look ahead not back. McCartney explains, "For me “Vintage Clothes” is about my clothes from the ’60s and the fact that what’s out comes back, fashion going round in circles… It’s sort of saying don’t hold onto the past. The message of; vintage clothes are great but don’t live in the past." Listen to the audio stream.

“That Was Me”
McCartney explains, "So all I had to do for this song was to think back. And immediately I go back to Liverpool where there was a little place we could escape to, beautiful little woods." But you don't need an explanation from the songwriter to understand this funky little trip down memory lane. It's a fun track that strolls through; not only his personal memories, but many of them are the universal rites of passage. Listen to the audio stream.

“Feet In The Clouds”
The song has a nostalgic theme similar to "That Was Me," with a very different over-all tone. Again, the song seems to dig back to not only past memories but musically it seems to revisit some classic McCartney styles. "The song is like a therapy session for me. I wanted to go robotic on some harmonies, to do a vocoder type thing because it’s kind of a nostalgic sound and yet it’s robotic," says McCartney. Listen to the audio stream.

“House of Wax”
McCartney describes the song, "It’s quite surreal lyrically. So I enjoyed singing them [lyrics] because of those chords and the mixture of the melody and the lyrics. I think this will be good to do live." It has a massive, epic orchestration to it and does have a very dreamlike tone. It's a sharp contrast to many of the uplifting and fun melodies, but interesting and enjoyable nonetheless. Listen to the audio stream.

“End of The End”
Not only signaling the end of this collection, this song also deals with the end of life. A 'last will' of sorts making funeral arrangements and plans for an after-life, the song still somehow finds a way to be uplifting and hopeful. It's a deep and weighty subject but McCartney explains, "I remember once an Irish woman wished me well by saying ‘I wish you a good death’ and I was like, ‘Say what!?’ I thought about it and thought actually it’s a great thing to wish someone. It was quite a brave subject for me." Listen to the audio stream.

“Nod Your Head”
"Well that ‘End of The End’ brought the party down didn’t it? “End of The End”
was going to be the last track on the album but then we thought we can’t leave everyone going ‘oh god, I’m not going to listen to that again.’ So we had a little stompy rocker called ‘Nod Your Head’ and we thought, we’ve just got to let them off the hook," observes McCartney. Stompy rocker is a very good over-all description. Nothing heavy or reflective to the lyrics, but an enjoyable little ride just the same. It's short at 1:58, but it's the perfect way to close out Memory Almost Full.
Listen to the audio stream. 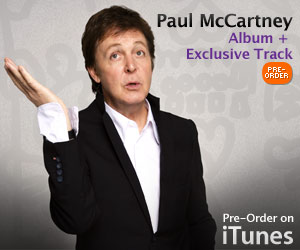 You can pre-order Memory Almost Full at iTunes by clicking on the image to the right. The album is also available at Amazon.com and all the usual places you buy music as well as all Starbucks' locations.

Of McCartney's now 21 solo albums, this is the first to be offered in a digital format and will be released June 4 in the U.S., June 5 in the U.K. and June 6 in Japan. For more information on Memory Almost Full, streaming audio, and news information on Paul McCartney please visit his website.

Aaron McMullan's 'Swing Hosanna, Sing The Salt' is a wonderful chaotic dream of an album. As fine a piece of imagination as you'll ever hear.