...they will take far more pride and interest in the final result. Isn't that better than disinterest and scorn?

What About The Public In Public Art?

Richard Marcus September 26, 2005 Comments Off on What About The Public In Public Art? 72 Views

There’s nothing like a piece of art being thrown up in a public place to stir up a load of controversy. It gets even more spectacular when the public spot in question has been granted some sort of sacred status. Such a furor has erupted in London, England this past week over the placement of a new statue in Trafalgar Square.

Lord Nelson has been forced to share squatting rights with another amputee; this time an armless, virtually legless (Alison Lapper was born with extremely stunted legs) naked pregnant woman. For the next eighteen months, at least, the statue of Alison Lapper will gaze across the most famous square in London alongside men of military mien.

Now very few people could name the other folk who stand around as repositories of pigeon excrement, (King George 4th, Major General Henry Havelock, and General Charles Napier) but they all seem unified in their opinion that she has no place among such exalted company. It’s not even a question of artistic value, it’s a matter of that most British of sentiments; knowing one’s place.

Unlike all the others, it seems Ms. Lapper has never sent people into battle to kill or be killed. No one denies her bravery, or the fact that she’s overcome horrors: her mother gave her up to an orphanage, but refused to let her be adopted, and she was married to a sadist who wed her only for the pleasures her helplessness offered him. In spite of all this she has raised a son by herself, and has a successful career as an artist (she grips the brush with her teeth). But do those actions qualify her for national hero status on the scale reserved for icons like Lord Nelson?

While the question of her relative merits for inclusion is a minefield, the more general question of art in public places will reverberate long after her likeness has finished its visit with the dignitaries. When competitions are held to select artwork for public places, art work that in most cases will be paid for by taxpayer dollars, maybe some consideration should be given to the public’s opinion in before going ahead with a project?

What kind of freaking liberal are you? Talking about responsible usage of tax dollars? You’re going to have your membership revoked. Yeah, well, political dogmas don’t match up well with artistic expression at the best of times anyway, let alone when the art is going to be for public consumption. So political voices can all back to the other corners of my brain and shut the fuck up!

Sorry about that, where was I? Oh, yeah, public consultation on works of art to be displayed in venues. First of all you have to decide what is the purpose of public art? Huh? Well, is it to educate people about different art forms? Is it to celebrate specific people or moments in history? Is it to provide decoration or ornamentation for open space? Or, finally, is it to make a statement about some important social issue?

I don’t think that art in the square is the place for people to be educated about different forms and schools of art. That’s what we have museums and galleries for. But people never go to them, you say, how are we ever going to educate the great unwashed if they’re never exposed to “Art”? Well if you take that attitude towards most people they’re liable to tell you to shove your “Art” where the sun doesn’t shine.

The issue of getting people into museums and galleries is a different kettle of fish altogether. The thing is, people don’t want to have education shoved down their throats, whether it’s about art, history, or politics. It’s attitudes like the former that alienates people even more from the arts, making them even more elitist than they already are.

Challenge people’s conventions in an art gallery, where they are free to choose whether or not they have to look at a piece. When you plunk something down in a square, designed for public consumption it’s important to at least attempt to consider most peoples sensibilities. Publicly funded art placed in squares and the like is not the venue for experimentation in form, or even content.

A major consideration is that the subject matter of any public art has to be put into context of its potential location. What’s appropriate for a park setting or fountain might not be complementary to, say, Capitol Hill or Buckingham Palace. Public expectations would not allow an abstract representational sculpture to sit alongside the Lincoln Memorial. The anarchist in me loves the idea of sticking some postmodern abstraction in close proximity to the staid realism of historical icons, but the part of me who looks at the bigger, less selfish picture, realizes how self-defeating that is.

With so few people taking an active interest in the arts, and artistic expression under attack from many directions, the artistic community can’t afford to alienate the public by forcing inaccessible art on them. Use these opportunities to show the beauty that can be produced; how art can communicate to everybody, not just a select few.

This doesn’t necessitate compromise on anybody’s part. One only need look at the art that adorns most public squares in European cities to realize that. Statues have stood for centuries, through years of changing styles and taste, and been accepted and enjoyed by successive generations. These artists worked according to the requirements of their patrons and still were able to produce works of incredible beauty and soulfulness.

One of the arguments being used to justify Ms. Lapper’s representation being placed in Trafalgar Square is that it’s bringing the issue of the disabled out into the open. But using publicly funded art for addressing specific issues, no matter how valid it may seem to some, opens a can of worms. The moment sociopolitical issues enter into the picture, simple artistic appreciation goes out the window.

The issue outweighs the art, defeating the purpose of putting art in public in the first place. One should not make decisions on art from a standpoint of politics and social issues, unless the situation or circumstances make it appropriate. To supplant aesthetic considerations with shock value or socio-political concerns, in my eyes, brings the whole selection process into question. How do we know the best piece of art has been selected, and that the work chosen isn’t just the flavour of the month politically? (London art critics have been near universal in their panning of the sculpture of Ms. Lapper.)

If you are looking to commemorate a person from your country’s history, someone whom the people have strong positive feelings about, isn’t it a good thing to select a statue that people find indicative of the qualities they admired in that person? People want to see their heroes in the best light possible in order to remind them of what it was that made that person special. 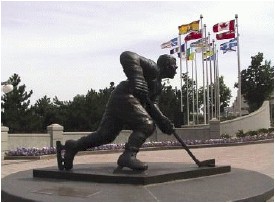 Two statues that come to mind for me are ones of Terry Fox and Rocket Richard, two iconic figures in Canada. In both instances the sculptor has frozen the subject in a pose that reflects a characteristic universally recognised by everybody. For Terry it is mid stride, his face furrowed in concentration as he’s swinging his artificial leg forward. In the Rocket’s case he is in his familiar crouch, skating forward eternally, eyes boring holes into whichever unfortunate is going to be attempting to stop his progress.

Public art is not limited to sculpture. Murals are becoming more and more a part of the contemporary city’s landscape, and the architecture of publicly funded buildings such as museums and galleries have to be considered in this category as well. In all instances there have been controversial decisions made that have angered either the public or the artistic community. The worst thing that a selection committee can do is upon selecting a winner, bow to public pressure after the fact and shelve it.

Not only has it been a waste of public money, but with that kind of support offered, how many artists are going to want to enter in agreement with them in the future? People charged with selecting art for public places have to start including the public in the process. Not only will it give people the feeling that they are involved, but it will generate interest in the project, that otherwise may have been lacking.

A brilliant example of how this can work was the Royal Ontario Museum in Toronto, Ontario. They have been rebuilding the venerable institution for decades. For the final piece of the renovations they decided to go public with the decision making process for the winning architect.

For each of the five short-listed architects, they held open presentations, to gauge the public’s reactions to each of the options. The Museum staff was overwhelmed by the turnout. So many people wanted to attend that after the first evening, people had to reserve places in order to be seated.

When the final decision was made, while support wasn’t universal, it was more widely approved of than is usual in too many of these instances. The Museum has also seen a huge increase in interest for the facility in general. This seems an ideal model for other institutions to follow.

If we are going to have a policy of putting art into public places, doesn’t it make sense to include both parts of that equation in the selection process? Shouldn’t the public have some say in the matter? By offering people the opportunity to participate in choosing what art is displayed in their community, they will take far more pride and interest in the final result. Isn’t that better than disinterest and scorn?