The outcome of Shakespeare's battle of the sexes is not so much reversed as made a fairer fight.

Theater Review: Taming of the Shrew

Jon Sobel November 6, 2005 Comments Off on Theater Review: Taming of the Shrew 98 Views

It’s a common problem in the theater: how to maintain reverence for the text of a great work when the message of that text has become politically incorrect. One can play it straight, aiming for historical accuracy, or one can risk undermining the art by updating the story. To explain just how the Queen’s Company, an all-female troupe, manage the task in their delightful and thought-provoking new feminist rendition of Shakespeare’s Taming of the Shrew would be to give away too much of what makes the production so entertaining. Suffice it to say they succeed grandly in giving the play a modern spin while presenting Shakespeare’s language with its grace and bawdy humor intact.

As it must have in the Bard’s day – only here in reverse – it takes just moments to suspend disbelief and accept the female actors as men. After a scene or two, one ceases observing how they ape and exaggerate male postures and mannerisms, and gets swept up in director Rebecca Patterson’s zippy telling of Shakespeare’s tale of the loudmouthed, independent Kate (played with commanding charm by the spunky but focussed Carey Urban); her meek, proper sister Bianca (whose unconventional casting is even more interesting than the changed sex roles); and their pompous suitors. As with many modern productions of Shakespeare, this Shrew has been cut somewhat, and Patterson has contributed a new prologue; a musical production number Shakespeare probably would have enjoyed seeing; and some original stage business, notably during Petruchio’s attempts to break Kate’s spirit and during the latter’s climactic speech admitting that

I am asham’d that women are so simple
To offer war where they should kneel for peace,
Or seek for rule, supremacy, and sway,
When they are bound to serve, love, and obey.

But no essential story elements are lost, and in some almost magical way the fine acting, brisk direction and genial high spirits marry the text quite naturally to a feminist interpretation. The outcome of Shakespeare’s battle of the sexes is not so much reversed as made a fairer fight. And the happy ending of this classic comedy is to be found less in the mandatory weddings than in the extraordinarily touching expression of true love with which the production leaves us.

The one-named Samarra plays Petruchio with all the requisite manly swagger, oozing lechery and confidence. Every cast member, in fact, contributes skill and boisterous energy; all are adept at the play’s requisite physical comedy – wonderfully staged by Patterson – as well as the playwright’s incomparable language. Terri Power even steals a few scenes in a nearly silent Servant role. Beverly Prentice as Hortensio especially shines with crystal-clear diction and amazingly spot-on delivery of every line.

Lighting and sound are in more than capable hands, contributing not only color and atmopshere but motion and pace. The set and costumes are perfect, just what’s needed and no more. But it’s Patterson’s conception, and the actors’ fulfillment of it, that make this production, if not a Shrew for the ages, certainly a fine Shrew for today. Among other things the play is a character study of an outspoken young woman chafing against male domination. It takes surprisingly little manipulation to turn its surface meaning around, since it already hides a fairly modern message. The Queen’s Company reveals the real heart of Kate’s character – and by extension, the human condition – in a speech less famous but more touching than the one at the end:

My tongue will tell the anger of my heart,
Or else my heart, concealing it, will break.

Who hasn’t felt that? Kate stands in for all of us. Now through November 20 at Walkerspace (in lower Manhattan). 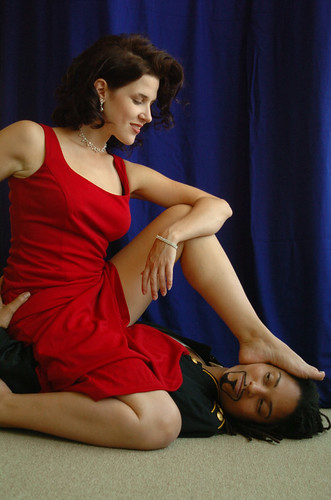