An April night's fever dream of the beasts and angels of war.

Doris Baizley’s play Shiloh Rules is farce in the best sense of the word. With humor — including the physical kind — and high spirits, it shines a light on serious matters of culture and history. It’s an April night’s fever dream of the beasts and angels of war – specifically the American Civil War, and more precisely the women who bore water to the soldiers and nursed the injured and dying during the bloody Battle of Shiloh.

Kate Weiman and Cordis Heard play veteran re-enactors, for the North and South respectively, who have each brought a new recruit to the field. As the older women’s reasons for participating are gradually revealed — each, in very different ways, goes well beyond merely being a history buff — their young protegees (Janine Kyanko and Judi Lewis Ockler) see their own, shallower motivations replaced by sometimes frighteningly transformational depths of involvement. In their most gripping scenes, these four — joined by an African-American park ranger, played by Samarra, who loses her objectivity as her grip on civic order loosens — smoothly convey the easy slippage between self-conscious role-playing and actually becoming the characters they’re portraying. 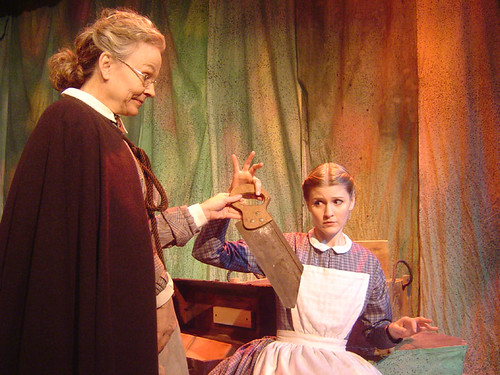 Kate Weiman as Clara and Janine Kyanko as Meg. Photo by Kila Packett.

Michaela Goldhaber’s fast-paced and artful direction aid the wonderful cast in the creation of this magic. Lights, music, and especially sound help create the fog of war without any actual fog — or even soldiers (although, in a fine Shakespearean touch, the spunky LucyGale Scruggs — as perfectly named as she is played by Ockler – goes undercover as one). The script moves brightly along, vividly painting the characters as it tells their multilayered story. Rounding out the cast, Gwen Eyster sparkles as the Widow Beckwith, an unaligned capitalist who keeps a cool modern eye on the proceedings even as she plays her part in the re-enactment follies. Though there is perhaps a whiff of the Mary Sue about her, the Widow provides a grounding force that helps keep the proceedings honest.

The play isn’t perfect. The way the no-nonsense Ranger Wilson gets drawn into the dialogue and action against her better judgment seems a little forced (though she does get some of the best lines). And the denouement drags as the characters spell out lessons learned and revelations that were in some cases already adequately conveyed by the preceding action, in others not really “earned” at all. But those are minor flaws in an entertaining, thought-provoking, and beautifully acted production.