Get shipwrecked with Viola and Sebastian in the Queen's Company's hilarious, updated but fully Shakespearean take on the classic comedy.

The all-female Queen's Company updates the classics with a modern pop-culture sensibility, while remaining true to the language, the story, and the groove of the original text. With a comedy like Shakespeare's Twelfth Night, this gang is also funny as hell. In fact, I laughed so much I got a headache. Damn you, Queen's Company.

One might imagine that Twelfth Night, with its cross-dressing plot and high ribaldry, would be perfect – or else problematic – for an all-female troupe. In fact, it is neither. The cast is overall so skilled, and directed so cleverly by Rebecca Patterson, that we hardly sense the non-traditional casting at all. The production succeeds entirely on the same merits as would any good Shakespearean staging, whether cast with men and women, with all men as in Shakespeare's time, or with the women of the QC.

It's been three years since I last saw one of this group's productions. Since that time they've maintained their energy while building their skills even further. Patterson's staging conceptions are brisk as ever, but have deepened, with increased subtlety. The cuts are judicious. The actors' line reading choices serve both clarity and high spirits. And the musical numbers just have to be seen to be believed. 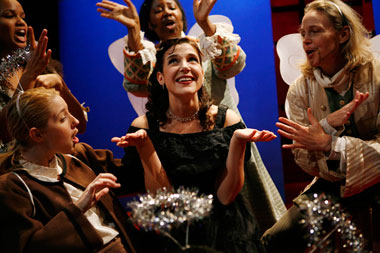 It's a good thing she has excellent castmates to play off of, otherwise Aysan Çelik might steal the whole show. Her dart-sharp, hilarious Malvolio preens and pouts and struts, carrying us along with every move or glance. She even pulls her weight when she's not on the stage, merely being talked about. Carey Urban, who played Kate with panache in the company's Taming of the Shrew, makes a flouncy and tangy Olivia, and Virginia Baeta is a delightful, gamine-like Viola. Only Gisele Richardson's Sir Toby Belch could be improved – though it's a physically spot-on performance (and she's done up like a riotously drunken Al Sharpton), the lines are sometimes lost in swallowed diction.

Feeling drowned in our gloomy economic times? Get shipwrecked with Viola and her brother Sebastian (the elfin Amy Driesler) in the court of Duke Orsino (the regal Frances Uku) and his fool, Feste (the sly Natalie Lebert). A dip into The Queen's Company's singing, dancing, and fully Shakespearean version of fanciful Illyria is just the tonic for troubled days like these.