It's pretty hard to imagine a more difficult role for an actor to play... than a television.

Television can contain everything and give us the whole universe. Voracious and all-encompassing, it conveys not only every kind of information, but every kind of experience – or at least audiovisual representations, which, for many experiences, are the only versions we'll ever have. So – though I admit I've never had occasion to think about this before – it's pretty hard to imagine a more difficult role for an actor to play… than a television.

A New Television Arrives, Finally demands a tour de force performance from its central figure, Television, and it got one from Emmy winner Tom Pelphrey last night. (On alternate nights, British actor Victor Villar-Hauser assumes the role instead.) Taking an absurd premise to stratospheric heights of excess, it is also the sort of work that defies standard critical rhetoric. That won't stop me from wholeheartedly recommending this powerful, innovative play.

Playwright Kevin Mandel cites as inspirations David Rabe's Hurlyburly – presumably for its characters' attempts to find meaning in lives that seem empty – and Ionesco (shorthand for the Theater of the Absurd), an obvious source given the play's loopy premise. But when he references Shakespeare, he's not just paying the default homage to the Bard that all English-language playwrights can safely pay. Mandel's theme may be an existential (what he calls "spiritual") crisis, but his language is what gives the play its force, and he has created the perfect outlet for his roaring cyclone of words in the character of Television.

Played by Pelphrey with gargantuan presence and jaw-dropping chops, Television turns up at a small apartment where Man (played, last night, by the listed understudy, Ari Vigoda) lolls about nursing a supposed stomach flu that's been keeping him home from work. Really, of course, it's an existential affliction manifesting as depression, and as it turns out, his fiancee, Woman (Kate Russell), is sharing the crisis, but dealing with it by storming about and cursing the world rather than withdrawing from it.

The two clearly love one another on some level. But, unable to connect physically, they come alive only when the fascinating, maddening, inspiring, hurtful, demagogic, and, eventually, violently psychotic Television engages them. Spewing metaphysics-steeped information about science, sports, eroticism, nature, business, history, politics, personality, war, and most of all, Nonsense (you can hear the capital "N"), the red-suited Joker evokes enthusiasm and hope, first in Man, and then, expressed more desperately, in Woman. Like a crazed prophet, he captivates and provokes them with surrealistic tales of political groups who "champion the benefits of Nonsense" or embrace an anti-ambition platform; of desolation shattered by the approach of a "Love Armageddon"; of child abuse, rape, raw eroticism. (A couple of a certain age walked out of the theater at this point. Whether the whole scene turned them off, or just the gloating repetition of the word "vagina," was unclear.) 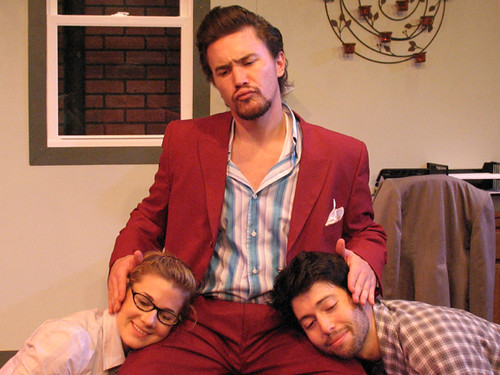 Kate Russell as Woman, Tom Pelphrey as Television and Ari Vigoda as Man. Photos courtesy of DARR Publicity/David Gibbs.
Then he torments them with insults and picks at their wounds: "You ghosts," he hollers, you "pathetic, trembling, ghastly cowards." Egos crushed, they open up to him in a bizarre sort of new-age acting exercise, and finally succeed in physically connecting.

But the next morning…

No, you'll have to see the play to find out whether things actually wrap up that neatly in the end. And unless you can't handle the word "vagina," see it you should. Though a bit overlong, it's funny, a little dangerous, and blessed with glorious language. Pelphrey gives a ravishing performance. (I may try to see it again, on one of Villar-Hauser's nights.) Russell is quietly real and, when called for, bitterly explosive as Woman; Vigoda (officially the understudy) is droll and touching as Man; and together the pair make a humble, scurrying sort of magic as they're bullied, seduced, and, at least seemingly, elevated by the cataclysm called Television – that all-knowing, godlike entity who rules the living rooms, the rooms where we live, in the homes of all but the most contrary of us.